ABSTRACT
Most dromaeosaurids were small- to medium-sized cursorial, scansorial, and arboreal, sometimes volant predators, but a comparatively small percentage grew to gigantic proportions. Only two such giant “raptors” have been described from North America. Here, we describe a new giant dromaeosaurid, Dakotaraptor steini gen. et sp. nov., from the Hell Creek Formation of South Dakota. The discovery represents the first giant dromaeosaur from the Hell Creek Formation, and the most recent in the fossil record worldwide. A row of prominent ulnar papilli or “quill knobs” on the ulna is our first clear evidence for feather quills on a large dromaeosaurid forearm and impacts evolutionary reconstructions and functional morphology of such derived, typically flight-related features. The presence of this new predator expands our record of theropod diversity in latest Cretaceous Laramidia, and radically changes paleoecological reconstructions of the Hell Creek Formation.

Etymology.— Dakota, referring to the geographic location of the discovery as well as the Dakota First Nations Tribe, plus raptor, Latin for “plunderer”. The specific name honors paleontologist Walter W. Stein.

Locality and horizon.— Upper Hell Creek Formation (Upper Maastrichtian), no more than 20 m below the Cretaceous-Paleogene Boundary, Harding County, South Dakota, U.S.A. The fossils were discovered in medium- to fine-grained sandstone with clay-pebble laminae that was part of a low-energy stream channel facies. While the type strata were deposited in an active fluvial system, transport energy was sufficiently low that it was not uncommon to find bones >10 cm in length from various other taxa still articulated with their adjacent elements, and plant matter that bore virtually no taphonomic alteration. In several instances, articulated or associated small vertebrate skeletons were recovered. No other theropod bones were recovered from the type substratum except for Dakotaraptor. Flora at the study locality places the site within the HC III floral zone (Johnson, 2002). 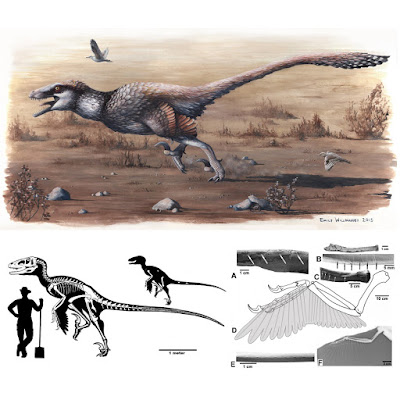 CONCLUSION
A giant, feathered dromaeosaurid exhibited by gracile and robust morphotypes was unexpected and thus is an important addition to the Hell Creek fauna. It fills the gap in body size distribution between the small maniraptorans and large tyrannosaurids previously documented in the formation, while adding to the known diversity of Hell Creek maniraptorans. Dakotaraptor also records a fourth event in which dromaeosaurids achieved atypically large body size. Moreover, the presence of quill knobs, indicative of elongate, stiffened feathers on the forearms, is unprecedented in giant dromaeosaurids and requires a reexamination of trends in quill knob evolution. The functional morphology of the long feathers, possibly of modern avian aspect as implied by known Asian forms, must also be considered. Subsequent studies of Dakotaraptor and the Hell Creek fauna may aid in our understanding of the circumstances that prompted dromaeosaurids to retain ligamental architecture for feather attachment, and may also provide information critical to a more accurate understanding of the lost capacity for flight. 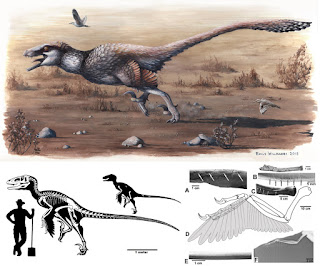