Abstract
A new species of tree-hole gecarcinucid freshwater crab, Arachnothelphusa merarapensis, is described from a primary dipterocarp forest near Merarap Hot Spring Resort in Lawas, northern Sarawak, Malaysia. This brings the number of species in the genus Arachnothelphusa found in Borneo to five, and it is likely that more species will be discovered from this island. The new species has preference for living in water-filled tree-holes, which is the first record of a tree-hole crab for Southeast Asia. The habitat characteristics and distribution of this new species are also discussed. 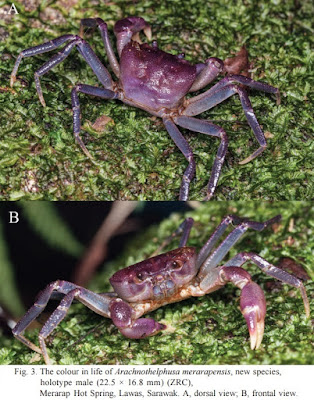 Etymology. The species is named after Merarap, the type locality where it was collected.

Habitat. The habitat of A. merarapensis is a steep primary dipterocarp forest with a closed canopy, near the thermal springs area of the Merarap Hot Spring Resort. The holotype male was caught from a water-filled tree-hole, ca. 22 cm deep, ca. 15 cm in diameter, and ca. 100 cm above ground (Fig. 4). The bottom layer of the tree-hole consists of finely decomposed organic material (plant and arthropod debris), with the other two-thirds filled with water which increases after heavy rain. The two other specimens were caught from the water-filled crevices of tree buttresses. One buttress-crevice had a diameter of about 26 cm, was 60 cm deep, and 90 cm above the ground, and contained tightly compacted roots and leaf litter, with a hole dug into this that was apparently constructed by the crab. The other buttress-crevice runs along the side of the buttress and is about 30 cm above ground, shallow (15 cm), horizontal, and 30 cm deep. For two consecutive nights, the first two authors examined more than 15 tree-holes and crevices of different form, size, and conditions (either water-filled, dry, or debris-filled tree-holes), but we were only able to locate three specimens. This species is nocturnal and highly sensitive to light. We did not find any burrows on the soil around the tree-holes, suggesting the crab is a tree-hole specialist.

Conservation status. Considering unique habitat and probable limited distribution, A. merarapensis will easily be threatened by human activities, especially logging. The type locality is not protected but the forest is currently safe because it is part of the Merarap Hot Spring Resort. However, the forest in the vicinity is part of a concession allocated to logging companies and the future of the species is therefore uncertain. As such, we recommend that A. merarapensis should at least be listed as “Vulnerable” in the IUCN Red List of Threatened Species (cf. Cumberlidge et al., 2009). 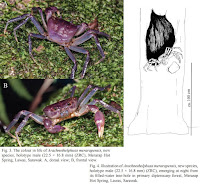