ABSTRACT
In January, 2011, a colony of Hipposideros lankadiva was discovered in Kachin State, upper Myanmar. The large size of the specimens when compared to those from peninsular India led to a review of the taxonomy of the species and the description of a new subspecies from Myanmar, with material from north-east India referred to this new taxon. The distribution of the species from throughout its range is summarised and mapped. Based on the material from Myanmar, new information is provided on the acoustic characters and the bacular morphology. Short notes are provided on its ecology in Myanmar and north-east India. 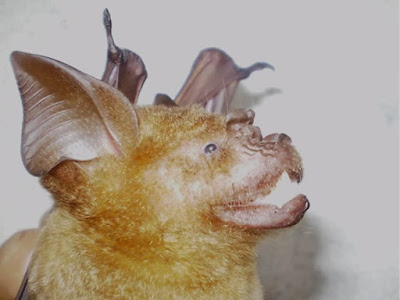 Distribution. — Hipposideros lankadiva gyi is known from Myanmar and north-east India. In addition, the species is recorded from Sri Lanka, India, and Bangladesh (Fig. 6, for details see Appendix 1).
Remarks. — Although genetic data are not currently available for H. l. gyi, a follow-up study of Hipposideros lankadiva from throughout its range is being planned. This will include morphometric, genetic and acoustic data sets and will review in detail the phylogeny of three subspecies.

The colony of H. l. gyi at Pawtawmu Cave was estimated to number about 1,000 individuals, although no precise count could be made. In addition, there were about 20,000 fruit bats, Eonycteris spelaea, and a few individuals of the small leaf-nosed bat, Aselliscus stoliczkanus. The cave, which is at an elevation of 245 metres (798 feet) above sea level, is situated in a limestone outcrop. It comprises two stories with the main chamber measuring about 260 m in length, 6 m in width and 11 m in height. The outcrop is surrounded by heavily disturbed evergreen forest, which includes wild banana and coconut (MMA and OMT, pers. observations).

Material from Mizoram State, here referred to H. l. gyi, was collected at an elevation of about 250 metres beside a bamboo plantation (Mandal et al., 1997) whilst that from Manipur State was collected at 175 metres on a hill-top with rubber plantations (Mandal et al., 1993). In Meghalaya, it was found in ‘incredible numbers, closely covering the entire walls and the roof’ at the end of a tunnel some 360 metres from the entrance of Siju Cave (Kemp, 1924).

Information about the ecology of H. lankadiva indus and H. l. lankadiva in peninsular India and Sri Lanka is included in Bates and Harrison (1997).

Conservation status. — The conservation status of Hipposideros lankadiva is listed by the IUCN Red List as ‘Least Concern’ (Molur et al., 2008). According to Bates and Harrison (1997), it is known from a relatively small number of colonies but many of these are large. One colony of over 11,000 individuals is known from Sri Lanka and a colony of about 6000 individuals was observed in Meghalaya (Molur et al., 2008). 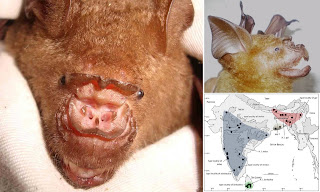 As part of the mentoring session in scientific writing during the SEABCRU meeting at University of Mandalay, Myanmar 2 years ago. Here we present taxonomic papers based on a bunch of interesting unpublished data of local researchers there! Congratulations to Paul Bates, Ohnmar Tun, Moe Moe Aung, Aung Lu, Roi Lum and Prof. Mie Mie Sein on the first report and a new subspecies of Hipposideros lankadiva from Myanmar, H. lankadiva gyi, named after their retired senior bat researcher, 'Stanley' Khin Maung Gyi.
facebook.com/groups/125833910791607/permalink/965947973446859/