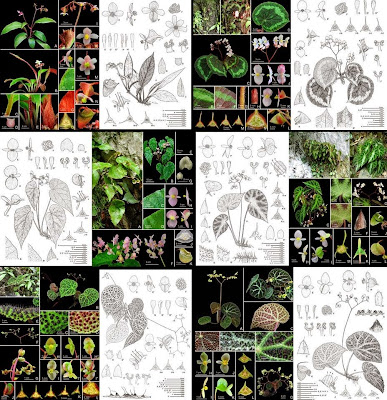 Species of Begonia are richly represented in limestone karst areas across the Sino-Vietnamese border. More than one hundred species were known, many of which were documented recently.

In continuation of our systematic studies of Asian Begonia, we report six species of Begonia that are unknown to science, namely B. caobangensis [sect. Platycentrum], B. circularis, B. melanobullata, B. langsonensis, B.locii and B. montaniformis [sect. Coelocentrum] from Northern Vietnam. Diagnostic features that separate them from morphologically allied species are provided. Somatic chromosome numbers were determined, which supports their placement in the respective sections. Foliar SEM microphotographs were taken and described.

A careful study of the literature, herbarium specimens and living plants, both in the wild and in cultivation in the experimental greenhouse, supports the recognition of the six new species, which are described and illustrated.