Abstract
Schistura sirindhornae, a new species of nemacheilid, is described from the Nan River basin in northern Thailand. It is distinguished from all other species of Schistura in having overlapping scales on the entire body similar to scales of balitorids, transparent scales on the belly and thorax, a lateral-line canal that is similar to that of most cyprinids and balitorids in being present across the entire lateral-line surface of the scale instead of being represented only by a pore. It also has a unique color pattern of irregular brown bars on the back and side of the faint yellow-orange body, a bright triangular orange mark on the occiput, an orange crown-shaped mark between the eyes, an uninterrupted black mark along the base of the dorsal fin, a crescent-shaped bar on the base of the caudal fin, and bright iridescent orange areas on the upper and lower extremities of the caudal-fin base. Schistura sirindhornae is known only from the upper Nan River drainage, Nan Province, Thailand.

Ecology, food and reproductive biology. Schistura sirindhornae lives in upland areas on the bottoms of cool, clear, flowing streams with pools and forest canopy. Schistura sirindhornae has been collected from 721-1,155 m above sea level in steep streams in Huay Nampan and tributaries of the Nan River basin. The Huay Nampan was about 2–4 m wide (Fig. 8A) and 0.2–0.5 m deep at the time of sampling (start of the hot-dry season); water volume might be much higher during the rainy season. This species was observed only in shaded areas and was absent from light-exposed open areas and lowlands. Substrate consisted mainly of stones, bedrock, and some sand and gravel in small pools. The upper stream bank was covered by large native trees with more than 90% canopy cover. At the time of sampling, the water was clear, and the temperature was 18.4°C (air temperature 22.5°C), conductivity 2.6 S · m−1, and pH 6.5. Other species of fishes collected with S. sirindhornae were S. menanensis (Nemacheilidae) and Oreoglanis suraswadii (Sisoridae). Gut dissections indicated that S. sirindhornae feeds mainly on aquatic insect larvae.

Distribution. Schistura sirindhornae is known only from the tributaries of the upper Nan River basin, in Pua and Borkluea districts, Nan Province, Thailand. The type locality is a small creek with a very steep slope, in Huay Nampan, Ban Khunkoon, Moo 2, Tumbon Phukha, Pua District, Nan Province (Figs. 8A and 9). Collection localities are in the upper-most tributaries near Xayaboury Province of the People’s Democratic Republic of Lao.

Etymology. The species epithet honors Her Royal Highness Princess Maha Chakri Sirindhorn for her 60th birthday anniversary, her biodiversity conservation projects including a Plant Genetic Conservation Project Under the Royal Initiation of Her Royal Highness Princess Maha Chakri Sirindhorn (RSPG), several projects in education and protein source security for rural communities, and many projects located in Nan Province, the type locality of this species. 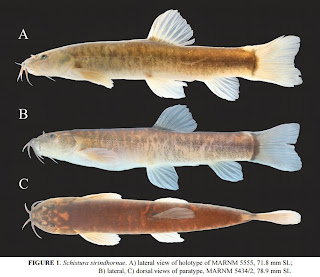 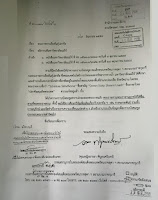