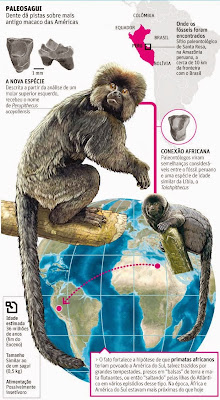 The platyrrhine primates, or New World monkeys, are immigrant mammals whose fossil record comes from Tertiary and Quaternary sediments of South America and the Caribbean Greater Antilles. The time and place of platyrrhine origins are some of the most controversial issues in primate palaeontology, although an African Palaeogene ancestry has been presumed by most primatologist. Until now, the oldest fossil records of New World monkeys have come from Salla, Bolivia, and date to approximately 26 million years ago, or the Late Oligocene epoch. Here we report the discovery of new primates from the ?Late Eocene epoch of Amazonian Peru, which extends the fossil record of primates in South America back approximately 10 million years. The new specimens are important for understanding the origin and early evolution of modern platyrrhine primates because they bear little resemblance to any extinct or living South American primate, but they do bear striking resemblances to Eocene African anthropoids, and our phylogenetic analysis suggests a relationship with African taxa. The discovery of these new primates brings the first appearance datum of caviomorph rodents and primates in South America back into close correspondence, but raises new questions about the timing and means of arrival of these two mammalian groups.