A left frontal from the Upper Cretaceous Kirtland Formation (De-na-zin Member), San Juan Basin, New Mexico, is diagnosed as Saurornitholestes sullivani n. sp., a new species of dromaeosaurid (Theropoda: Dromaeosauridae). The frontal is similar to Saurornitholestes langstoni in being triangular in shape, not basined between the median suture and the orbital rim, and having the caudal portion of the frontal well-rounded and slightly inflated, without evidence of a frontoparietal crest. It is distinct from S. langstoni in being more constricted anteriorly, possessing less prominent nasal facets, possessing a less prominent anterior projection between the nasal and lacrimal facet regions, having a deeper and less strongly demarcated orbital rim, possessing a deeper and more prominent olfactory bulb surface, possessing a more pronounced and longer ventrally-directed ridge between the olfactory bulb surface and the cerebral hemisphere surface, possessing a more robust frontal-frontal sutural surface, and while being slightly smaller in overall size, still being more robust than S. langstoni. The enlarged olfactory bulb surface is believed to convey a greater olfactory sense in this dinosaur, in particular in comparison to S. langstoni, and may have been important for its predatory behavior. Saurornitholestes sullivani represents the only known dromaeosaurid from the Late Cretaceous of southern Laramidia, and specifically the San Juan Basin of New Mexico, and shows geographic and temporal differences between the two currently recognized species of Saurornitholestes. 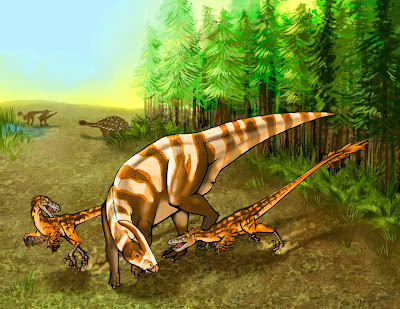 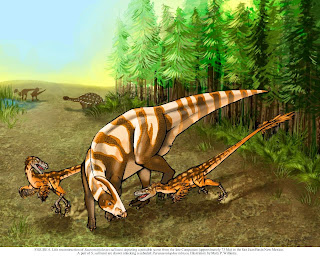