Auricularia is an important genus among the jelly fungi due to its popular consumption and medicinal properties. A new species of Auricularia, A. thailandica is described from fresh collections made from the Philippines, Thailand and Southern China based on morphological and molecular characters. Auricularia thailandica differs from other species by having short and loosely arranged abhymenial hairs on the basidiomata and in the different size of the zones in a cross section of the basidiomata. The species is found to be widely distributed in Southeastern Asia. Phylogenetic relationships were inferred based on the nuclear ribosomal internal transcribed spacer (ITS) region. The new species is introduced with full description and illustrations. 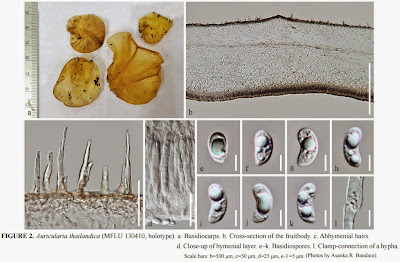 Etymology:— The species epithet “thailandica” refers to the country from where the holotype was collected.