[Ichthyology • 2015] Taxonomic Review of the Species of Mugil (Perciformes: Mugilidae) from the Atlantic South Caribbean and South America, with Integration of Morphological, Cytogenetic and Molecular Data

Analysis of morphological, molecular and cytological data helped to define and more precisely characterize the species of Mugil from the Atlantic coasts of South Caribbean and South America, allowing a correction of prior misidentifications and distributional ranges. A new species from Venezuela is described and all the species from the area are redescribed. It is demonstrated that the apparent similarity in morphological traits, which contradicted the results from recent molecular studies, is the result of the misuse of traditional morphological characters, and thus both the molecular and cytological data instead are congruent with the morphological differences that are found among mullet species. The presence of Mugil hospes Jordan & Culver in the western south Atlantic is refuted based on the comparison of type material of this species with specimens from this area that also indicated a very significant morphological difference, what on the other hand justifies the recognition of these specimens as Mugil brevirostris (Ribeiro). The distribution of Mugil incilis Hancock is restricted and the similarities among the species formerly depicted in a prior dendrogram is modified following the inclusion of recently obtained molecular data for Mugil curvidens Valenciennes. 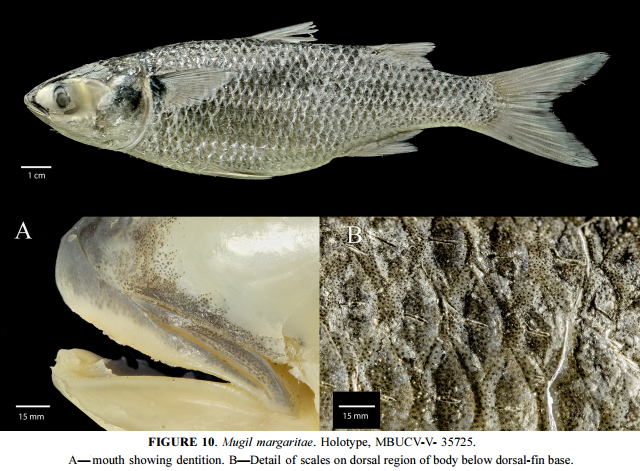