[Herpetology • 2013] Asthenodipsas lasgalenensis • Cryptic Speciation within Asthenodipsas vertebralis (Boulenger, 1900) (Squamata: Pareatidae), the Description of A New Species from Peninsular Malaysia, and the Resurrection of A. tropidonotus (Lidth de Jude, 1923) from Sumatra: An Integrative Taxonomic Analysis

A review of the taxonomic status of the Asian Slug Snake, Asthenodipsas vertebralis (Boulenger, 1900) based on an in-tegrative taxonomic approach using molecular, morphological, color pattern, and ecological data indicate it is composed of three well supported monophyletic lineages: (1) Pulau Tioman and Fraser’s Hill, Pahang and Bukit Larut, Perak; Pen-insular Malaysia; (2) its sister lineage from Northern Sumatra; and (3) the remaining basal lineage from Peninsular Malaysia. Furthermore, we consider the high sequence divergence (6.3%–10.2%) between these lineages (especially in areas of sympatry) and discrete differences in their morphology, color pattern, and microhabitat preference as evidence they are not conspecific. As such, we resurrect the name A. tropidonotus (Lidth de Jeude, 1923) for the Sumatra populations, re-strict the name A. vertebralis to the populations from Pulau Tioman, Genting Highlands, Fraser’s Hill, Gunung Benom, and Bukit Larut that contain terrestrial, banded adults; and consider Asthenodipsas lasgalenensis sp. nov. to be restricted to the populations from Fraser’s Hill, Cameron Highlands, and Bukit Larut that contain arboreal, unbanded adults. 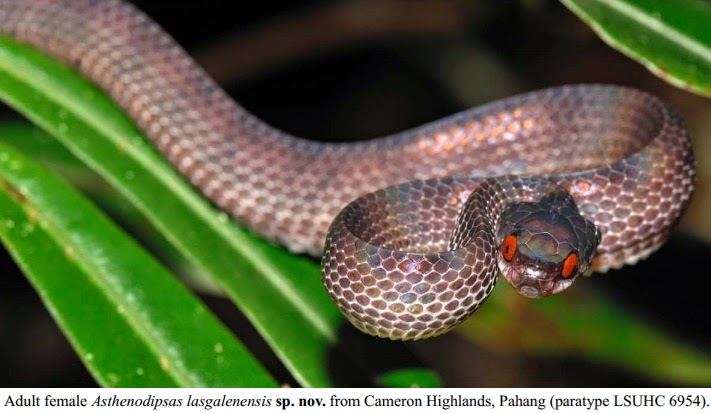 Distribution. Asthenodipsas lasgalenensis sp. nov. is known only from Genting Highlands, Fraser’s Hill, Cameron Highlands, Pahang and Bukit Larut, Perak (Fig. 1). It is likely A. lasgalenensis sp. nov. and A. vertbebralis range throughout the montane cloud forests of northeastern Peninsular Malaysia as well as throughout similar habitats in southern Thailand south of the Isthmus of Kra.

Natural History. The localities from which Asthenodipsas lasgalenensis sp. nov. was found are montane cloud forests above 800 m in elevation. All specimens were found at least 1 m above the ground at night foraging or resting in vegetation.

Etymology. The specific epithet lasgalenensis is derived from the name Eryn Lasgalen which means in the “Wood of Greenleaves” in the fictional Sindarian language from J.R.R Tolkien’s The Lord of the Rings (1955). It was the name used by the Wood Elves for the Mirkwood Forest after its cleansing following the War of the Ring. This name was chosen because Tolkien’s (1955) description of this forest showed great similarity to the cloudy, upland forests within which this species is found. 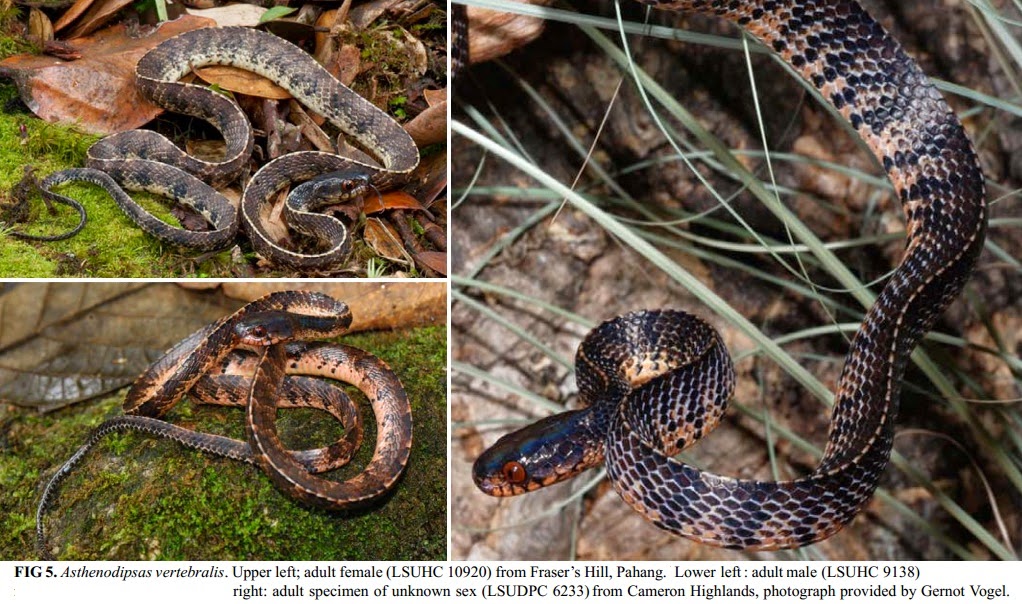