[Paleontology • 2014] Torvosaurus gurneyi • the Largest Terrestrial Predator from Europe, and a Proposed Terminology of the Maxilla Anatomy in Nonavian Theropods 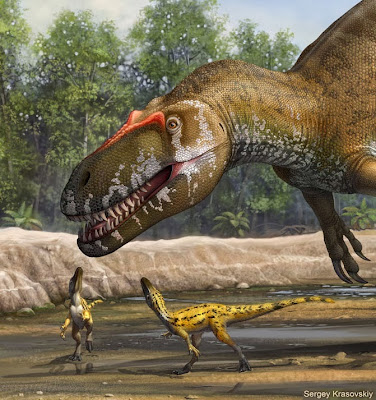 Abstract
The Lourinhã Formation (Kimmeridgian-Tithonian) of Central West Portugal is well known for its diversified dinosaur fauna similar to that of the Morrison Formation of North America; both areas share dinosaur taxa including the top predator Torvosaurus, reported in Portugal. The material assigned to the Portuguese T. tanneri, consisting of a right maxilla and an incomplete caudal centrum, was briefly described in the literature and a thorough description of these bones is here given for the first time. A comparison with material referred to Torvosaurus tanneri allows us to highlight some important differences justifying the creation of a distinct Eastern species. Torvosaurus gurneyi n. sp. displays two autapomorphies among Megalosauroidea, a maxilla possessing fewer than eleven teeth and an interdental wall nearly coincidental with the lateral wall of the maxillary body. In addition, it differs from T. tanneri by a reduced number of maxillary teeth, the absence of interdental plates terminating ventrally by broad V-shaped points and falling short relative to the lateral maxillary wall, and the absence of a protuberant ridge on the anterior part of the medial shelf, posterior to the anteromedial process. T. gurneyi is the largest theropod from the Lourinhã Formation of Portugal and the largest land predator discovered in Europe hitherto. This taxon supports the mechanism of vicariance that occurred in the Iberian Meseta during the Late Jurassic when the proto-Atlantic was already well formed. A fragment of maxilla from the Lourinhã Formation referred to Torvosaurus sp. is ascribed to this new species, and several other bones, including a femur, a tibia and embryonic material all from the Kimmeridgian-Tithonian of Portugal, are tentatively assigned to T. gurneyi. A standard terminology and notation of the theropod maxilla is also proposed and a record of the Torvosaurus material from Portugal is given. 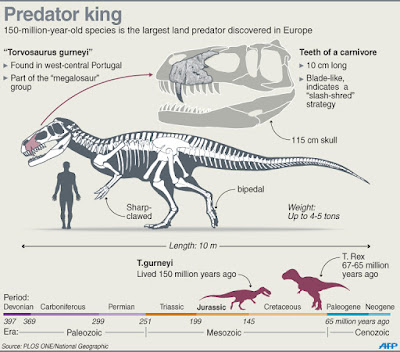