Summary
Modern porpoises (Odontoceti: Phocoenidae) are some of the smallest cetaceans and usually feed near the seafloor on small fish and cephalopods. Within both extinct and extant phocoenids, no evidence for specialized mandibular morphology has been documented. Here we describe a new species of extinct porpoise, Semirostrum ceruttii, from the marine Pliocene San Diego (4.2–1.6 mega-annum, Ma) and Purisima (5–2.5 Ma) formations of California. The mandibles comprise a long, fused, and nearly edentulous prognathous symphysis, extending farther beyond the rostrum than in any known mammal. Phylogenetic analyses based on morphology reconstruct Semirostrum ceruttii as sister to extant (crown) porpoise species with moderate support. We describe the spectacularly preserved holotype specimen based on computed tomography (CT) scans, which allowed visualization of the elongate mental and accessory canals within the symphysis. The elongate canals are similar to those found in Rynchops birds and were likely involved in sensory function. Oblique labial wear facets present on numerous small conical mandibular teeth posterior to the symphysis suggest regular contact with benthic substrate. The unique mandibular and dental characteristics, along with robust scapulae, sternum, and unfused cervical vertebrae, support the interpretation that this species employed a form of benthic skim feeding by using its mandible to probe for and obtain prey. 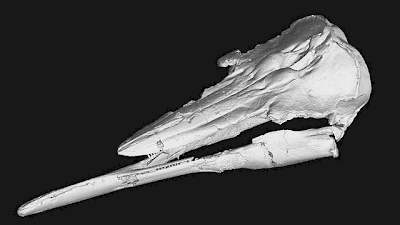