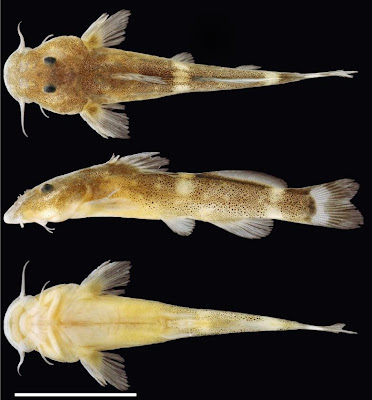 Chiloglanis orthodontus is one of three new members of the genus described from the lower Malagarasi river basin, western Tanzania

Abstract
Recent fieldwork and review of existing collections containing Chiloglanis specimens from the lower Malagarasi and Luiche rivers in western Tanzania has revealed three new species that are readily distinguished from described congeners by external features. Two of the species, Chiloglanis igamba sp. nov., and Chiloglanis orthodontus sp. nov. are restricted to the Malagarasi basin. The third species, Chiloglanis kazumbei sp. nov., is more broadly distributed in both the Malagarasi and adjacent Luiche basin. A key to all described species within these two basins is presented, along with comments on the distribution and validity of nominal Chiloglanis species examined during this study. 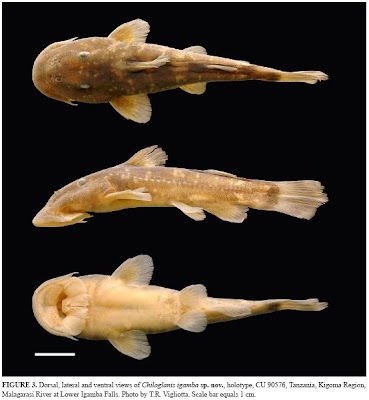 Etymology: The specific name refers to the type locality of this species, Igamba Falls on the Malagarasi River. This is the first major series of waterfalls encountered while navigating upriver from Lake Tanganyika, and is a potential site for a hydroelectric dam. Used as a noun in apposition.

Distribution: This species is known from two general localities in the lower Malagarasi River (the type locality at Igamba Falls (Fig. 2) and upriver near Uvinza), and is probably endemic to the basin. This species is most abundant within the Igamba Falls area and associated large rapids, and is much less common in smaller rapids both above and below these falls. 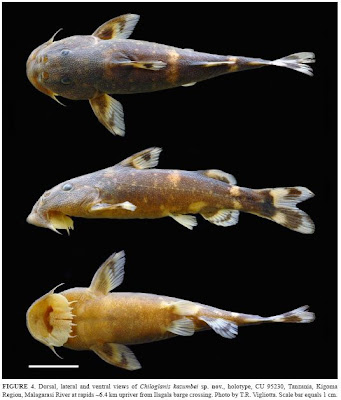 Etymology: This species is eponymously named for Mr. George Kazumbe, an expert fisherman and friend from Kigoma, Tanzania. He has assisted the authors and several of our colleagues doing fieldwork in Tanzania, and we wish to honor him for his service.

Distribution: This species is known from both the lower Malagarasi River and adjacent Luiche River (Fig. 2), and is typically found in small to moderate sized rapids. 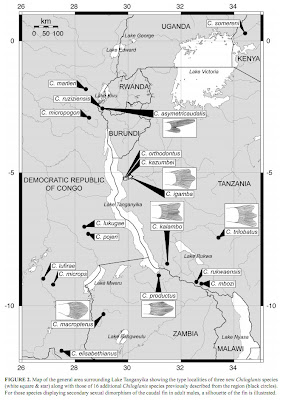 FIGURE 2. Map of the general area surrounding Lake Tanganyika showing the type localities of three new Chiloglanis species (white square & star) along with those of 16 additional Chiloglanis species previously described from the region (black circles). For those species displaying secondary sexual dimorphism of the caudal fin in adult males, a silhouette of the fin is illustrated. 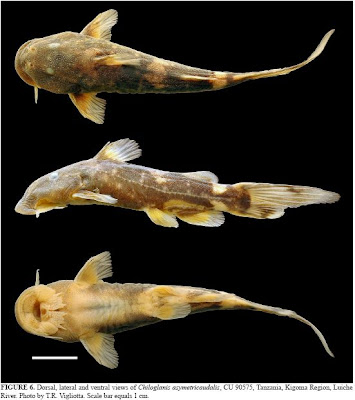