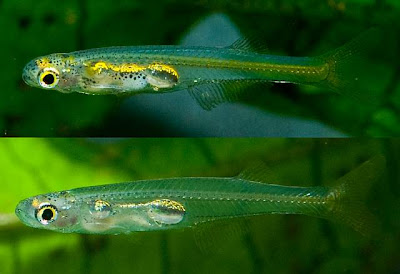 Abstract
Danionella priapus, a new species of sexually dimorphic miniature cyprinid from the Brahmaputra drainage in India, is distinguished from the other three species in the genus by the presence in adult males of a conical projection of the genital papilla situated between funnel-shaped pelvic fins, the number of anal- and pectoral-fin rays, and the position of insertion of the last anal-fin pterygiophore. It differs further from D. translucida and D. mirifica in details of the colour pattern, from D. dracula and D. mirifica in number of procurrent caudal-fin rays, from D. translucida in number of vertebrae and from D. dracula in several skeletal characters. Like the other species in the genus, D. priapus shows a developmentally truncated skeleton that is associated with several evolutionary morphological novelties. The present distribution of the Danionella species may be the result of a vicariance event in the early Miocene, when the tectonicuplift of eastern Tibet and the Indo-Burman ranges lead to the interruption of the palaeo-connection between the Tsangpo (Brahmaputra) and the upper Irrawaddy Rivers. 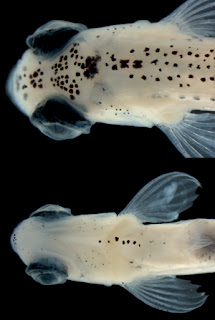