[Paleontology • 2002] Jeholornis prima • A long-tailed, seed-eating bird from the Early Cretaceous of China 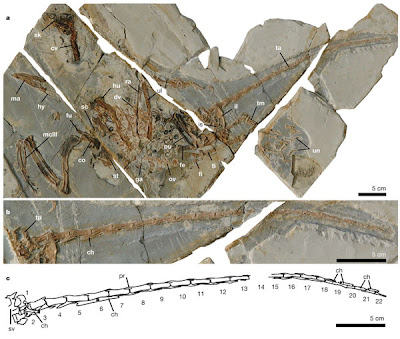 The lacustrine deposits of the Yixian and Jiufotang Formations in the Early Cretaceous Jehol Group in the western Liaoning area of northeast China are well known for preserving feathered dinosaurs, primitive birds and mammals. Here we report a large basal bird, Jeholornis prima gen. et sp. nov., from the Jiufotang Formation. This bird is distinctively different from other known birds of the Early Cretaceous period in retaining a long skeletal tail with unexpected elongated prezygopophyses and chevrons, resembling that of dromaeosaurids providing a further link between birds and non-avian theropods. Despite its basal position in early avian evolution, the advanced features of the pectoral girdle and the carpal trochlea of the carpometacarpus of Jeholornis indicate the capability of powerful flight. The dozens of beautifully preserved ovules of unknown plant taxa in the stomach represents direct evidence for seed-eating adaptation in birds of the Mesozoic era.