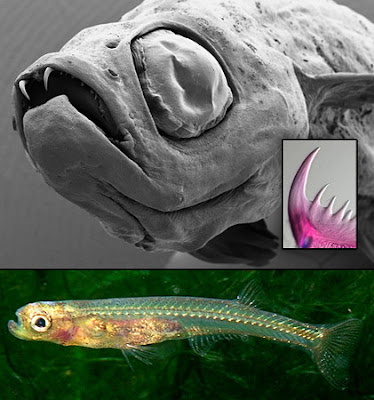 Danionella dracula is a new species of sexually dimorphic, miniature and highly developmentally truncated cyprinid fish. Compared with its close relative, the zebrafish Danio rerio, it lacks 44 bones or parts thereof and represents one of the most developmentally truncated vertebrates. Absence of the majority of bones appears to be due to developmental truncation via terminal deletion. In contrast to these larval-like features, D. dracula also shows several hyperossifications. Uniquely, among carp-like fishes, male D. dracula have a series of long, pointed odontoid processes on the jaws greatly resembling the jaw dentition of teleosts with true teeth. The anterior-most process in each jaw is extended as a canine-like fang projecting through the epithelium. True jaw teeth are absent from all 3700 species of cypriniforms and were lost at least in the Upper Eocene. It remains to be investigated, however, whether the conserved pathways to regulate tooth development in cypriniforms have been used in D. dracula to form and pattern the odontoid processes. This new species represents a remarkable example linking progenetic paedomorphosis via heterochronic change in developmental timing to the evolution of morphological novelties. 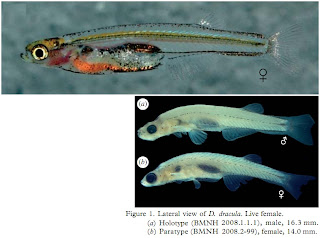 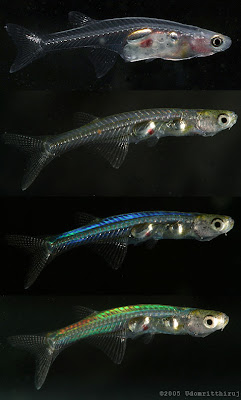 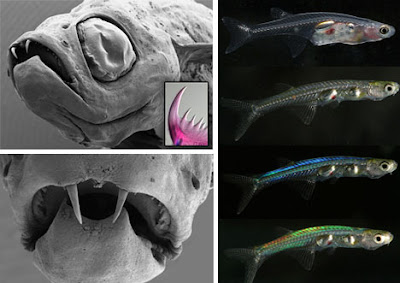 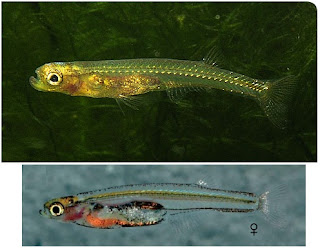 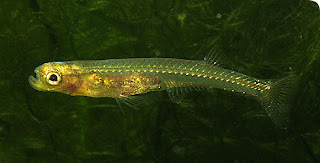