A new species of agamid lizard, Phrynocephalus lutensis sp. nov., is described from the Lut Desert in Iran. It is a species adapted to wind-blown sand in this semi-isolated basin. It appears to be most closely similar to P. luteoguttatus and P. euptilopus on the basis of external morphology. A key to the 19 known Phrynocephalus species of southwestern Asia and Arabia is presented for the first time. 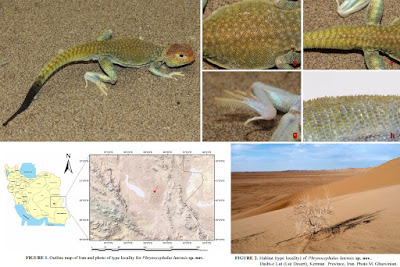 
Habitat (Fig. 2). The substratum on and in which the species is found is wind-blown sand, to which the morphology, and especially the fringed digits and nostril valves, are well adapted. The immediate habitat lies at the south-easternmost edge of the Dasht-e Lut, a semi-enclosed basin, surrounded by mountains, similar to such basins throughout southern Central Asia. The area in which this species lives is called Rig-e Yalan (Mega Dune). The elevation of the area from which the specimens were taken was about 700–1000 meters above sea level with high elevated dunes with height of about 400 meters in some parts. Within the Dasht-e Lut, wherein Mega Dune lies, is the hottest point in the world. The surface temperature in warm seasons goes up to 70.7°C (as recorded by NASA) and in cold seasons and at night it decreases to -10°C (reported by collector). At the time that specimens were taken the lowest and highest daily air temperatures were 15° and 30°C, respectively.
Thus far, nothing is known of the species’ behavior or ecology.

Discussion: Based on Arnold’s (1999) analysis of external morphology and his phylogenetic tree, Phrynocephalus lutensis sp. nov. would form a clade with P. euptilopus Alcock & Finn 1896 (Fig. 5) and to P. luteoguttatus Boulenger 1887 (Fig. 6), and these to a larger clade also including P. interscapularis and P. sogdianus. All occur in similar sandy deserts, P. interscapularis the most widely distributed, the other four narrowly distributed, P. lutensis in southeastern Iran, P. luteoguttatus and P. euptilopus in the Dasht-e Margo south of the Helmand River in southwestern Afghanistan and Pakistani Balochistan. Still lacking is a morphological and molecular analysis of the entire genus and a phylogeographical hypothesis based thereon. However, as we lack for P. lutensis sp. nov.. Arnold’s analysis of skeletal and soft anatomy, this remains only a speculation. 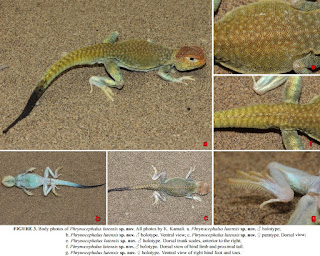