[Paleontology • 2015] Phosphorosaurus ponpetelegans • A New Halisaurine Mosasaur (Squamata: Halisaurinae) from Japan: The First Record in The western Pacific Realm and The First documented insights into Binocular Vision in Mosasaurs

Abstract
A specimen of a halisaurine mosasaur is reported from Japan for the first time, closing the pre-existing biogeographical gap between the Middle East and the eastern Pacific. Phosphorosaurus ponpetelegans sp. nov., from the lowermost Maastrichtian of Hokkaido, has been assigned to the genus Phosphorosaurus for sharing the following suite of major cranial characters with P. ortliebi, the type species from Belgium: apex of posterodorsal triangular plateau on frontal reaching level of interorbital constriction; frontal lateral border forming a step-like junction between interorbital and preorbital segments of frontal; preorbital segment of frontal sloping anteroventrally; and stapedial meatus parallel-sided in latero-medial view. Potential autapomorphies that distinguish P. ponpetelegans from other members of Halisaurinae include: postorbitofrontal jugal process elongate and stalk-like, projecting laterally; this process distally bearing a ventrally facing depression for jugal articulation; and lateral surangular–articular suture angular rather than round. The long and laterally projecting jugal processes, when combined with a depressed as well as narrow snout, provide compelling evidence for well-developed binocular vision for the new mosasaur, with an estimated binocular field of view (BFoV) of 35°. This value is unusually high for non-ophidian squamates that typically exhibit a BFoV of 10—20°, and is higher than those of other measured mosasaur taxa by at least 5°. Among colubrid snakes, nocturnal species exhibit greater BFoV than diurnal ones in both arboreal and terrestrial taxa. Known also from the Maastrichtian of Hokkaido are fossils of lantern fish (myctophids) and 10-armed cephalopods (coleoids), both of which are typically bioluminescent today. It is hence proposed that the exceptionally large, forward-facing eyes of P. ponpetelegans may well have been a special adaptation for a nocturnal lifestyle, where they hunted small, bioluminescent prey at night while avoiding direct competition with larger, more piscine mosasaurine taxa such as Mosasaurus hobetsuensis that co-existed with P. ponpetelegans.

Etymology: From the words ‘ponpet’, which means a creek in Ainu (language of the indigenous peoples of Hokkaido), and ‘elegans’, Latin for elegant, making reference to both the exceptional preservation of the holotype and the clean Pankerusano-sawa Creek from which the fossil was derived. In addition, ponpet is the etymological source of the village name Hobetsu.

Type locality and horizon: East side of the Pankerusano-sawa Creek, approximately 5 km east of Hobetsu and 2 km west of Tomiuchi, Hokkaido, northern Japan (Fig. 1). The horizon is the lowermost section of unit IVb of Matsumoto (1942, 1959). The lowermost Maastrichtian heteromorph ammonoid Nostoceras hetonaiense (Toshimitsu et al. 1995) occurs at this horizon (Fig. 1D). The section roughly corresponds to the lower middle part of the Hakobuchi Formation (Takashima et al. 2004) of the Yezo Group. 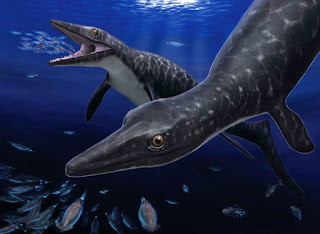