We describe a new species of the genus Cyrtodactylus on the basis of three specimens from Khammouane Province, Laos. Cyrtodactylus soudthichaki sp. nov. is distinguished from the remaining congeners by the combination of the following characters: adult SVL 69.2–70.0 mm; dorsal head and neck with dark blotches; nuchal loop present; dorsum with five brown bands between limb insertions; 19 or 20 irregular rows of dorsal tubercles; 32 or 33 ventral scale rows; ventrolateral folds present, with distinct tubercles; dorsal surface of hind limbs with tubercles; 29 precloacal and femoral pores in a continuous row in males, precloacal pores absent in the female; enlarged femoral and precloacal scales present; 4 or 5 postcloacal tubercles; and subcaudals transversely enlarged. The new species most closely resembles Cyrtodactylus jaegeri and Cyrtodactylus roesleri in overall coloration and pattern. However, they can be clearly distinguished from each other in the number of dorsal tubercle rows, ventral scales, and femoral and precloacal pores. Cyrtodactylus soudthichaki is the 16th species of Cyrtodactylus known from Laos. 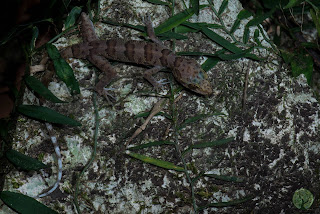 Etymology. This species is named in honour of Mr. Sisomphone Soudthichak, from the Natural Resources and Environment Department of Khammouane Province, Laos, who provided great support for our field research in Laos since 2013. As common names, we suggest Soudthichak’s Bent-toed Gecko (English) and Soudthichak’s Ki Chiem (Laotian).

Natural history. The specimens were found between 19:00 and 21:00, on the branches of shrubs and karst boulders in a karst forest, approximately 0.3 m above the forest floor, between 150 and 170 m a.s.l. The karst forest included  species  of  the  dominated  families  Ebenaceae,  Dracaenaceae,  Arecaeae,  Poaceae,  Meliaceae,  and  Moraceae. The humidity at the time of collection was approximately 85% and the air temperature ranged from 23 to 26oC. 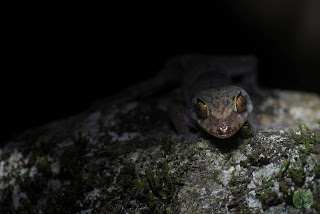 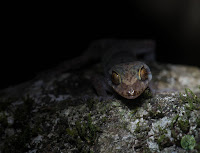