[Paleontology • 2015] Ischioceratops zhuchengensis • A New Leptoceratopsid (Ornithischia, Ceratopsia) with a Unique Ischium from the Upper Cretaceous of Shandong Province, China


Abstract
The partial skeleton of a leptoceratopsid dinosaur, Ischioceratops zhuchengensis gen. et sp. nov., was excavated from the bone-beds of the Upper Cretaceous Wangshi Group of Zhucheng, Shandong Province, China. This fossil represents the second leptoceratopsid dinosaur specimen recovered from the Kugou locality, a highly productive site in Zhucheng. The ischium of the new taxon is morphologically unique among known Dinosauria, flaring gradually to form an obturator process in its middle portion and resembling the shaft of a recurve bow. An elliptical fenestra perforates the obturator process, and the distal end of the shaft forms an axehead-shaped expansion. The discovery of Ischioceratops increases the known taxonomic diversity and morphological disparity of the Leptoceratopsidae.

The leptoceratopsids are a group of small, quadrupedal horned dinosaurs that have so far been found exclusively in the Upper Cretaceous (upper Santonian—upper Maastrichtian) of Asia and western North America. With a typical body length of about two meters, they are much smaller than the contemporary ceratopsids. The leptoceratopsids are characterized by robust jaws equipped with highly specialized large teeth and, unlike ceratopsids, lack horns and have extremely short frills. Nevertheless, leptoceratopsids share some of the advanced features seen in ceratopsids and are closely related to the latter group.

Leptoceratopsidae was originally named by Nopcsa in 1923 as a subfamily, with Leptoceratops gracilis as the type species. In 2001, Makovicky redefined Leptoceratopsidae as a stem-based taxon consisting of all species closer to Leptoceratops gracilis than to Triceratops horridus. Leptoceratopsids were once known only from the Upper Cretaceous of North America, but three taxa have been described from the Upper Cretaceous of Asia: Asiaceratops salsopaludalis from Uzbekistan, Udanoceratops tschizhovi from Udan-Sayr, Mongolia, and Zhuchengceratops inexpectus from the Kugou locality, Zhucheng, China. Leptoceratopsids are a relatively basal clade within Neoceratopsia, whose success as a parallel radiation to Ceratopsidae has been demonstrated by several important discoveries over the past few decades, including that of Prenoceratops pieganensis, and Cerasinops hodgskissi.

Here we report a new leptoceratopsid dinosaur that was also excavated from the bonebeds of the Upper Cretaceous Wangshi Group of Zhucheng. The new specimen, like Zhuchengceratops, comes from the Kugou locality. This locality, together with Longgujian (just 600 m north of Kugou) and Zangjiazhuang (5 km away from Kugou), has yielded numerous hadrosaurid bones. The Zangjiazhuang locality has also produced several tyrannosaurid elements and some material atrributable to Sinoceratops zhuchengensis, the only undisputed ceratopsid from outside of North America [16]. Though lacking cranial elements, the newly collected specimen possesses some morphological features that identify it as a non-ceratopsid neoceratopsian. In particular, the morphology of the ischium is unique among known Dinosauria. Discovery of this new taxon increases the taxonomic diversity and morphological disparity of the Leptoceratopsidae and has significant implications for interpretations of neoceratopsian biogeography.

Etymology: Genus name from ischium and ceratops (horn-face, Latinized Greek), in reference to the unique morphology of the ischium. The species name is in honor of Zhucheng, where the holotype specimen was discovered.

Holotype: Zhucheng Dinosaur Museum (ZCDM) V0016, an incomplete, partially articulated specimen (Figs 1–8) comprising the entire sacrum, a few ossified tendons, both halves of the pelvis, the anteriormost 15 caudal vertebrae in an articulated series, and the right femur, tibia and fibula.

Diagnosis: The specimen can be referred as a basal ceratopsian and distinguished from other known Dinosauria based on the following combination of characters: ossified tendons confirme that the specimen belongs to an ornithischian dinosaur, nine sacral vertebare exclude it from basal Ornithopoda or Anklysauridae, the lateral outline of ilium without lateral everted shelf on the dorsal edge exclude it from Iguanodontidae, Hadrosauridae, and Ceratopsidae. The neural spines of proximal caudals increase in length towards middle part of tail as in several basal ceratopsian dinosaurs such as Koreaceratops, Protoceratops, Cerasinops and Montanoceratops.

The specimen can be referred to Leptoceratopsidae and distinguished from other known leptoceratopsids based on the following combination of characters: nine sacral vertebrae, more than in any other known basal (non-ceratopsid) ceratopsian but fewer than in ceratopsids; The ischium is unique and presumably autapomorphic, with a robust shaft that resembles that of a recurved bow and flares gradually to form a subrectangular-shaped obturator process in its middle portion. An elliptical fenestra perforates the obturator process.

Well-established synapomorphies of Ceratopsia are mainly craniomandibular, and include the presence of a rostral bone, prominent jugal horns, a vaulted premaxillary palate, and a predentary with a broad base that supports the dentary symphysis. Unfortunately, few postcranial synapomorphies have been identified. However, the preserved postcranial skeletal elements that are available for Ischioceratops display features that preclude referral to any major ornithischian clade outside Ceratopsia, or identification of Ischioceratops as a ceratopsid. The nine sacral vertebrae exclude Ischioceratops from identification as a basal ornithopod or ankylosaurid and the lateral outline of ilium without a lateral everted shelf on the dorsal edge excludes Ischioceratops from iguanodontians, hadrosaurids, and ceratopsids. The increasing elongation of more posteriorly situated neural spines in the proximal half of the tail is similar to the condition in several basal ceratopsian dinosaurs, and a pendant, parallelogram-shaped fourth trochanter on the femur is similar to that in Montanoceratops.

The principal diagnostic feature of Ischioceratops is the fenestrated midshaft expansion of the ischial shaft. This highly unusual feature renders the ischium unlike that of any other dinosaur. While this unusual morphology prompts the question of whether it could be the result of pathology, several factors argue against this interpretation. Firstly, the expansion and opening occur symmetrically on both ischia, and both ischia bear a medial groove extending distally from the midshaft expansion. Furthermore the openings in the midshaft expansion appear to be true fenestrae with finished edges rather than the blind recesses sometimes observed in connection with tendon avulsions [86] or pus canals. We therefore assume that the ischial morphology observed in this specimen represents the normal condition in Ischioceratops, rather than a pathological anomaly.

Although it is tempting to homologize the ischial expansions of Ischioceratops with the obturator processes of more basal ornithopods/cerapodans, this is problematic for both topological and phylogenetic reasons. In basal ornithischians that have an obturator process, such as Hypsilophodon (Fig 8A3, and Tenontosaurus (FMNH PR 2173), this structure is restricted to the ventral border of the ischial shaft and is located well proximal to the midpoint of the shaft. By contrast, the expansion in Ischioceratops arises from the ventrolateral edge of the shaft and located distal to the midlength of the ischium. Furthermore, no other marginocephalian taxa exhibit obturator processes, and both of our phylogenetic analyses support a relatively derived position for Ischioceratops within Neoceratopsia. Thus, the ischial shaft expansion and fenestra are best viewed as a neomorphic character that is currently only known in Ischioceratops and unexpectedly increases the known morphological disparity of the otherwise rather conservative leptoceratopsid pelvis.

Another unique aspect of the Ischioceratops ischium is the knob-like distal expansion. This feature absent in other ornithischians, although a differently-shaped terminal expansion of the ischium is present in several non-hadrosauroid iguanodontians (Fig 8B3–8B5), some basal hadrosaurines (Fig 8C2–8C4) and some basal neoceratopsians (e.g. Auroraceratops, Fig 8E4, Protoceratops, Fig 8E5). In these species, the foot-like structure expands ventrally at a 90° angle from the main shaft, whereas in Ischioceratops the distal end of the ischium is expanded both dorsally and ventrally. The ischial shaft is unexpanded in most other neoceratopsian taxa in which it is known (Fig 8E2–8F4), although in Yinlong the middle portion of the ischium is ventrally expanded in lateral view. As with the midshaft expansion, the knob-like distal swelling appears to be an autapomorphy of Ischioceratops rather than a retained primitive feature.

The holotype of Ischioceratops was found at approximately the same stratigraphic level within the Kugou quarry as the holotype specimen of Zhuchengceratops, raising the question of whether the two specimens may be conspecific. Unfortunately, there are no overlapping skeletal elements between the two specimens. It depends on the recovery of overlapping material and future discoveries. Zhuchengceratops was recovered by our phylogenetic analysis has a close relationship with Ichioceratops in Leptoceratopsidae. Therefore, we provisionally consider Ischioceratops and Zhuchengceratops to be distinct taxa, although we acknowledge that future discoveries might reveal them to be synonymous. 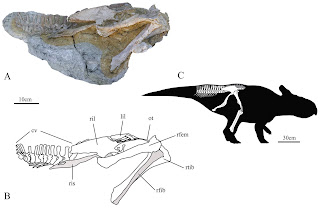 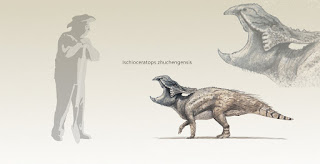 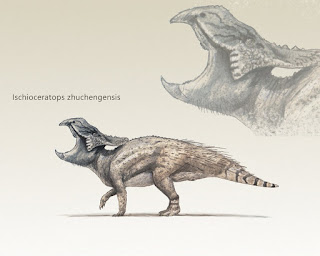