[PaleoMammalogy • 2015] Albicetus oxymycterus • A New Generic Name and Redescription of a Basal Physeteroid (Mammalia, Cetacea) from the Miocene of California, and the Evolution of Body Size in Sperm Whales

Abstract
Living sperm whales are represented by only three species (Physeter macrocephalus, Kogia breviceps and Kogia sima), but their fossil record provides evidence of an ecologically diverse array of different forms, including morphologies and body sizes without analog among living physeteroids. Here we provide a redescription of Ontocetus oxymycterus, a large but incomplete fossil sperm whale specimen from the middle Miocene Monterey Formation of California, described by Remington Kellogg in 1925. The type specimen consists of a partial rostrum, both mandibles, an isolated upper rostrum fragment, and incomplete tooth fragments. Although incomplete, these remains exhibit characteristics that, when combined, set it apart morphologically from all other known physeteroids (e.g., a closed mesorostral groove, and the retention of enameled tooth crowns). Kellogg originally placed this species in the genus Ontocetus, a enigmatic tooth taxon reported from the 19th century, based on similarities between the type specimen Ontocetus emmonsi and the conspicuously large lower dentition of Ontocetus oxymycterus. However, the type of the genus Ontocetus is now known to represent a walrus tusk (belonging to fossil Odobenidae) instead of a cetacean tooth. Thus, we assign this species to the new genus Albicetus, creating the new combination of Albicetus oxymycterus, gen. nov. We provide new morphological observations of the type specimen, including a 3D model. We also calculate a total length of approximately 6 m in life, using cranial proxies of body size for physeteroids. Lastly, a phylogenetic analysis of Albicetus oxymycterus with other fossil and living Physeteroidea resolves its position as a stem physeteroid, implying that large body size and robust dentition in physeteroids evolved multiple times and in distantly related lineages.

Etymology: Combining the Latin words albus (white) and cetus (whale). The name pays tribute to H. Melville’s classic American novel Moby-Dick; or, The Whale. In the novel, Melville refers to Moby-Dick as “the White Whale”, a creature of “unwonted magnitude” with a “remarkable hue” and “deformed lower jaw”. These traits are coincidentally similar to the type specimen of Albicetus, a white fossil sperm whale whose jaws have been displaced due to diagenetic processes, providing apt inspiration for the connection to the famous literary whale. 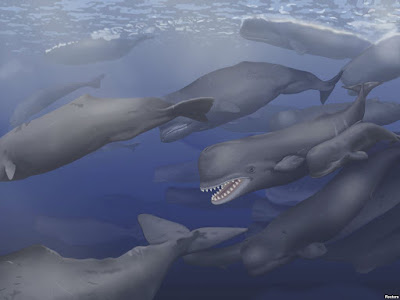 Holotype: USNM 10923, the incomplete extremity of the rostrum and mandibles, with 10 or 11 roots or portions of teeth in situ in each mandible, several incomplete teeth fragments found loose in the matrix, and a separate piece of the upper rostrum. Archival typewritten notes at USNM state that the specimen was first observed by Charles O. Roe (1867–1923) when he was a boy, and was collected by him some thirty years later in 1909, implying an initial discovery as early as 1879. These notes are consistent with Kellogg [28]’s report about the type specimen’s discovery around 1884, and it being subsequently moved to Roe’s home in 1909. The specimen was received by USNM on 16 February 1924 from Roe’s wife, after his death in 1923 [51].

Etymology: According to Kellogg, oxymycterus derives from the Greek words oxy (sharp) and mycter (nose).

Type locality: The type specimen was collected approximately 3.5 meters above the high tide line of a sea cliff approximately 20 m in height, north or near the original Santa Barbara Lighthouse, Santa Barbara, Santa Barbara County, California, U.S.A. (N 34° 20'12", W 119° 43'20" according to Kellogg) [28]. Archival typewritten notes at USNM indicate that the “exact locality is between the [original Santa Barbara] lighthouse and Hope Ranch,” and that “[other] parts of the skeleton are still in the bank.” Hope Ranch today is a residential community of approximately 1,600 acres, but in the late 19th century it was a large private property until the Southern Pacific Railroad purchased it for development in January 1876. Actual development on the terrain did not begin until 1923. It was likely during this period of time between purchase and development that C. A. Roe collected the type specimen (1879–1909), since the property lines of Hope Ranch abutted the original Santa Barbara Lighthouse.

The original Santa Barbara Lighthouse, however, was destroyed in an earthquake on 29 June 1929, and Kellogg’s published coordinates correspond to a location about 5 km directly south of the original lighthouse, offshore in Santa Barbara Bay. The published locality account by Kellogg corresponds today to sea cliffs located near the property of the current lighthouse, which is 100 m northeast of the original lighthouse, at the following coordinates (N 34° 23' 44", W 119° 43' 23"). We argue that this general vicinity, within less than a 100 m radius, likely represents the type locality of Albicetus oxymycterus (Fig 1).

Formation: Kellogg [28] described the stratigraphic provenance of the type specimen of Albicetus as a unit of bituminous dolomite in the sea cliffs of Santa Barbara County, likely belonging the Monterey Formation. This description is consistent with Minor et al.’s geologic mapping of the Santa Barbara Coastal Plain, which at the reported locality shows the underlying lowest three subunits of the marine siliceous and calcareous mudstone and shale belonging to the Monterey Formation. These marine rocks are mapped as the lower calcareous unit of the Monterey Formation. Overlying marine terrace deposits of Pleistocene age in this area do not match the lithology of the matrix with USNM 10923.

Age: Minor et al. summarized biostratigraphic findings for lower calcareous unit outcrops of the Monterey Formation in the Santa Barbara Coastal Plain. Benthic foraminiferal assemblages point to Relizian to Saucesian stages, and calcareous nannofossil zones CN1-CN5, with ages generally tending to be younger in the northwestern localities, and older heading to the southeast. For Santa Barbara Point, a locality less than 1 km due east of original Santa Barbara Lighthouse, Minor et al. reported benthic foraminiferal assemblages consistent with Relizian and Luisian Stages of Kleinpell and calcareous nannofossils of lower middle Miocene zone CN4. These data constrain the age of the type specimen of Albicetus to the early middle Miocene (~16–14 Ma), or Langhian.

Conclusions
We provided new information about an enigmatic fossil sperm whale from the Miocene of California, Albicetus oxymycterus, for which we provided a new genus name because of taxonomic priority of its original name with a fossil walrus. Our redescription of the type specimen of Albicetus provides new morphological details, along with revisions to the stratigraphy and locality data, as can best be ascertained given the available historical information. We provided a phylogenetic analysis to determine the relationship of Albicetus to other fossil sperm whales, along with body size estimates. Our results indicate that Albicetus was a large, stem physeteroid with a seemingly unique combination of diagnostic features observed in no other living or fossil physeteroid.

Alexandra T. Boersma and Nicholas D. Pyenson. 2015. Albicetus oxymycterus, A New Generic Name and Redescription of a Basal Physeteroid (Mammalia, Cetacea) from the Miocene of California, and the Evolution of Body Size in Sperm Whales.
PLoS ONE.  DOI:  10.1371/journal.pone.0135551

A Moby-Dick emerges from the Smithsonian collections and digitized
http://po.st/yw6eCu via @SmithsonianMag @NMNH
‘White whale’ is a ghost of sperm whales’ past
http://blogs.plos.org/paleocomm/2015/12/09/white-whale-is-a-ghost-of-sperm-whales-past