[Herpetology • 2015] A Reappraisal of The Rhacophorid Bush Frog Raorchestes flaviventris (Boulenger, 1882), with An Evaluation of The Taxonomic Status of R. emeraldi Vijayakumar, Dinesh, Prabhu and Shankar, 2014


Raorchestes flaviventris, a species of rhacophorid bush frog described from the Western Ghats by George Albert Boulenger in 1882, has never been reported from the region since its description. However, we herewith report a record of the species after almost 132 years and redescribe the species and also clarify confusions that prevailed over the taxonomic status of the species and its closely-related congeners, along with shedding light on literature regarding its distribution. Also, the recently described R. emeraldi Vijayakumar et al., 2014, which we suggest to be the same species, becomes a junior subjective synonym of R. flaviventris. 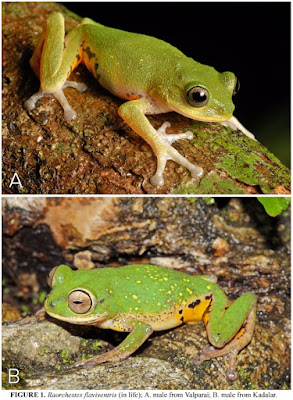