[Herpetology • 2015] Boophis boppa • A New Species of Bright-eyed Treefrog (Mantellidae) from Madagascar, with comments on Call Evolution and Patterns of Syntopy in the Boophis ankaratra complex

We describe a new species of Boophis treefrog from Ranomafana National Park in the southern central east of Madagascar. This region has remarkably high anuran diversity, and along with neighbouring sites, hosts more than 35 Boophis species. Boophis boppa sp. nov. is part of the B. ankaratra sub-clade (herein named the B. ankaratra complex), previously identified within the monophyletic B. albipunctatus species group. It occurs sympatrically with two other species of the complex (B. ankaratra and B. schuboeae). Morphological differentiation of species within the B. ankaratra clade remains elusive, but species are well characterized by distinct advertisement calls, with B. boppa having the longest note duration and inter-note intervals when compared to closely related species. Furthermore, it has moderate differentiation in mitochondrial DNA, with pairwise distances of 1.9–3.7% to all other species in sequences of the mitochondrial 16S rRNA marker. Additional evidence is given by the lack of haplotype sharing with related species for the nuclear exon DNAH-3. All examples of syntopic occurrence in this complex involve species with strongly different advertisement calls, while allopatric species have more similar calls. Such a pattern might result from adaptive call co-evolution but could also be the result of non-adaptive processes. Thorough clarification of the systematics of the B. ankaratra sub-clade is required, and we outline future directions for both bioacoustic and genetic research. 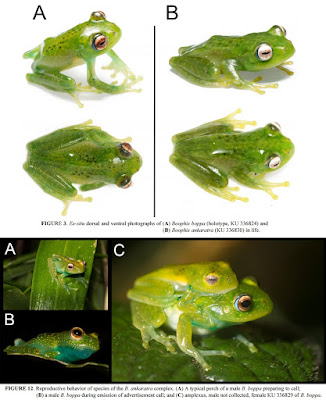 
Etymology. This species in named in honor of Nicholas Jay Pritzker, devoted grandfather, father and husband, brilliant businessman, philanthropist, amateur scientist, committed conservationist; and board member, supporter and long-time friend of Conservation International. The name ‘Boppa’ is an affectionate nickname used by his children and grandchildren. This dedication is courtesy of his youngest son Isaac, who has generously supported amphibian research in Madagascar, including this study and future taxonomic research as well. The species name is used as an invariable noun in apposition to the genus name.

Natural history: Boophis boppa was locally abundant but thus far only found in undisturbed, primary forests along fast moving streams and was occasionally found along slow flowing tributaries adjacent to fast streams. Males of the species typically were calling at night from the surfaces of vegetation less than three meters in height (Fig. 12A–B). Females of B. boppa were rarely encountered and were only observed while in amplexus (Fig. 12C). We also confirm that Boophis boppa is syntopic with Boophis ankaratra at Maharira and that the two species can be found calling less than a meter apart. This is also consistent with Andreone et al. (2007), which found B. boppa (i.e. Boophis aff. ankaratra) and B. ankaratra to occur sympatrically. Other syntopic species of Boophis at Maharira include: B. madagascariensis, B. majori, B. aff. marojezensis, B. aff. picturatus, B. popi, and B. reticulatus. 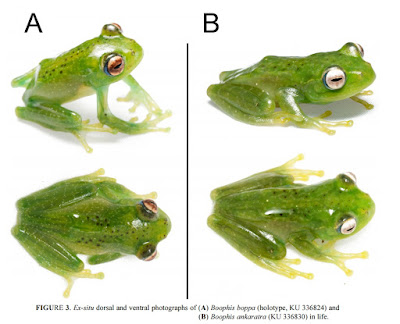