Abstract
A new species of troglobitic harvestman, Iandumoema smeagol sp. n., is described from Toca do Geraldo, Monjolos municipality, Minas Gerais state, Brazil. Iandumoema smeagol sp. n. is distinguished from the other two species of the genus by four exclusive characteristics – dorsal scutum areas with conspicuous tubercles, enlarged retrolateral spiniform tubercle on the distal third of femur IV, eyes absent and the penial ventral process slender and of approximately the same length of the stylus. The species is the most highly modified in the genus and its distribution is restricted only to caves in that particular area of Minas Gerais state. The type locality is not inside a legally protected area, and there are anthropogenic impacts in its surroundings. Therefore, Iandumoema smeagol sp. n. is vulnerable and it must be considered in future conservation projects.

Etymology: The specific epithet refers to the hobbit named Smeagol, created by J.R.R. Tolkien, being the original name of Gollum – the dweller of the caves located below the Misty Mountains of Middle-earth of the Lord of the Rings book.

The occurrence of Iandumoema smeagol sp. n. in the limestone caves of Bambuí Group, more specifically in the boundaries of Serra do Espinhaço Plateau (Figure 1) shows that this region must be the eastern boundary distribution of the genus, the quartzite and the high altitudes of Serra do Espinhaço being the possible barriers. The results show that the genus Iandumoema only occurs in the northern Minas Gerais state, occupying an area of ca. 8,000 km2, and is restricted to hypogean environments, being exclusive to caves. This distribution range corroborates those presented by Hara and Pinto-da-Rocha (2008). Most specimens were collected in the aphotic zone of Toca do Geraldo cave; and only one individual was recorded in the Lapa do Santo Antônio cave. The minimum distribution range for Iandumoema smeagol sp. n. (or occurrence area) is of 4.6 km2. The specimen collected in the Lapa do Santo Antônio cave was on the rocky substrate, at the twilight zone and close to the entrance (less than 50 m away). In four visits at Toca do Geraldo, the opilionids were observed on the walls (rocky substrate) and few on the silt substrate, always close to water bodies (drainage or pools). Despite the observed guano piles (of hematophagous bats), not one individual was observed close to them. The adults show solitary habits; on one occasion, one individual was feeding in litter, apparently scavenging carcasses of invertebrates (Figure 12). In two occasions, active juveniles were observed on the walls while the adults showed a behavior comparatively more sedentary. In the four occasions, a total of 14 individuals were observed including adults and juveniles, always close to the cave stream, showing a low abundance. Apparently, the cave does not have dry galleries and/or conduits, showing high relative humidity of the air (ca. 80%) and temperature amplitude between 22 and 24 °C.

As a result of their faunistic singularities and high endemism, hypogean environments are considered fragile. Besides their unique faunistic composition, the singularity of cave habitats is related to the presence of relicts, many times represented by troglobitic species. Gallão and Bichuette (2015) observed this tendency in a small area (24 km2) located at Chapada Diamantina, northeastern Brazil (at least 23 troglobitic species, most of them relict ones). Troglobitic species have unique sets of autapomorphies, such as eyes and melanistic pigmentation reductions allied to other troglomorphisms, such as pedipalps elongation in opilionids and other arachnids. A possible endemism in a karst area, which is threatened, was observed for Iandumoema smeagol sp. n. in addition to the accentuated autapomorphies. Projects for the installation of small hydroelectric dams and limestone extraction for cement production represent potential impacts on the immediate environment (M. E. Bichuette and R. Fonseca-Ferreira, pers. obs.). Moreover, the extent of occurrence area of the species (4.6 sq.km.) allied to the deforestation in the cave surroundings must place this species in a threatened category considering the IUCN criteria (Vulnerable, VU or Endangered, EN). Long-term studies focusing population biology and distribution of I. smeagol sp. n. are urgent and fundamental to establish an effective conservation policy, including the creation of protected area(s). 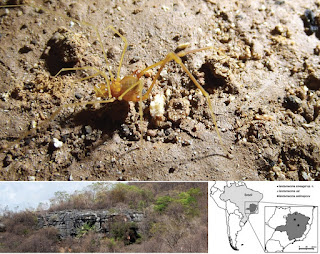