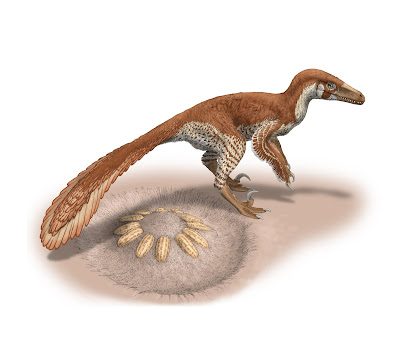 Knowledge about the types of nests built by dinosaurs can provide insight into the evolution of nesting and reproductive behaviors among archosaurs. However, the low preservation potential of their nesting materials and nesting structures means that most information can only be gleaned indirectly through comparison with extant archosaurs. Two general nest types are recognized among living archosaurs: 1) covered nests, in which eggs are incubated while fully covered by nesting material (as in crocodylians and megapodes), and 2) open nests, in which eggs are exposed in the nest and brooded (as in most birds). Previously, dinosaur nest types had been inferred by estimating the water vapor conductance (i.e., diffusive capacity) of their eggs, based on the premise that high conductance corresponds to covered nests and low conductance to open nests. However, a lack of statistical rigor and inconsistencies in this method render its application problematic and its validity questionable. As an alternative we propose a statistically rigorous approach to infer nest type based on large datasets of eggshell porosity and egg mass compiled for over 120 extant archosaur species and 29 archosaur extinct taxa/ootaxa. The presence of a strong correlation between eggshell porosity and nest type among extant archosaurs indicates that eggshell porosity can be used as a proxy for nest type, and thus discriminant analyses can help predict nest type in extinct taxa. Our results suggest that: 1) covered nests are likely the primitive condition for dinosaurs (and probably archosaurs), and 2) open nests first evolved among non-avian theropods more derived than Lourinhanosaurus and were likely widespread in non-avian maniraptorans, well before the appearance of birds. Although taphonomic evidence suggests that basal open nesters (i.e., oviraptorosaurs and troodontids) were potentially the first dinosaurs to brood their clutches, they still partially buried their eggs in sediment. Open nests with fully exposed eggs only became widespread among Euornithes. A potential co-evolution of open nests and brooding behavior among maniraptorans may have freed theropods from the ground-based restrictions inherent to covered nests and allowed the exploitation of alternate nesting locations. These changes in nesting styles and behaviors thus may have played a role in the evolutionary success of maniraptorans (including birds).