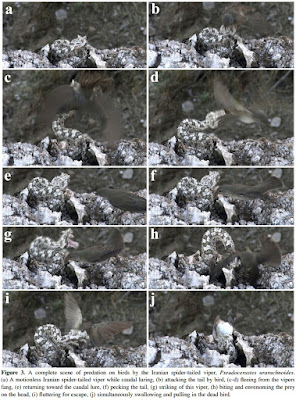 ABSTRACT
Pseudocerastes urarachnoidesis a fascinating viper and as yet has been reported only in western Iran. An elaborated arachnid-like caudal structure is a unique feature of this viper, hence gives it the common name “Iranian spider-tailed viper”. During tail wagging, the structure is reminiscent of a moving spider. Tail movements are used for two different purposes in snakes: defense via tail vibration and hunting via both caudal luring and caudal distraction. Caudal luring in snakes is the wriggling or wagging of the posterior part of tail, in the presence of a potential prey, with conspicuous color pattern while the rest of body is cryptically colored. Previous studies have speculated on the role of caudal structure of P. urarachnoides in hunting. Our 2.5-year study has revealed that development of the structure of the caudal lure is commenced after birth and is linearly correlated to snout-vent length. The caudal lure attracts some species of birds. Caudal luring behavior is carried out both in the presence and absence of birds. The findings are reported for the first time and confirmed by direct observation of undisturbed individuals in the field.