[Herpetology • 2015] Calotes minor || A Taxonomic Mystery for More than 180 Years: The Identity and Systematic Position of Brachysaura minor (Hardwicke & Gray, 1827)


Abstract
Brachysaura is a monotypic genus of agamid lizard found in the Indian subcontinent; the identity and systematic position of B. minor has been long debated, and it has at times been subsumed into Agama, Charasia and Laudakia, with some authors suggesting affinities to Calotes. We constructed nuclear and mitochondrial phylogenetic trees including Brachysaura and allied agamid genera to resolve its phylogenetic position. We also compared osteology and external morphology with the genera Agama, Calotes and Laudakia. Hemipenial morphology was compared with Calotes and some other agamids from South Asia. Both nuclear and mitochondrial phylogenies demonstrate that Brachysaura is nested within the widespread South and Southeast Asian genus Calotes, with which it also shares certain external morphological, osteological and hemipenial characters. Adaptations to ground dwelling in Brachysaura minor has resulted in unique modifications to its body plan, which is likely why generic allocation has been long confused. This study also highlights the need for an integrated systematic approach to resolve taxonomic ambiguity in Asian agamids. 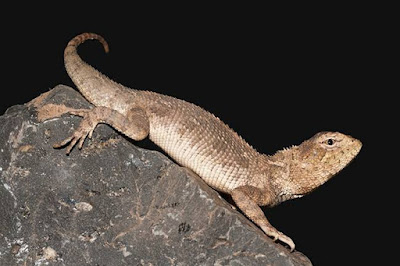 Notes on distribution
Brachysaura minor was considered to be one of the widespread species of agamid in the Indian subcontinent. However, most recent and confirmed records on the distribution of B.minor are from western and central India (see Ingle et al. 2012; Khan & Kumar 2010). The record of this species from Angul, Odisha by Chakraborty & Gupta (2009) is that of Psammophilus cf. blanfordianus. The voucher specimen (ZSI 25833) is deposited at the Zoological Survey of India, Calcutta. We identified this specimen as Psammophilus cf. blanfordianus based on the small scales on the body and strong fold in the shoulder region. Additionally, Brachysaura minor have plate like scales between the eye and above tympanum, which is missing in this specimen. The only record of B. minor from eastern part of the subcontinent is the type locality (Chittagong). Previous authors have raised their doubts about the occurrence of B. minor in Chittagong (see Khan & Kumar 2010). We also suspect this record is erroneous as the habitat at Chittagong is forested with high rainfall compared to open grassland in semi-arid and arid regions of western and central India. While rest of the areas where they occur have mean annual rainfall between 200–1500 mm, Chittagong has more than 2500 mm mean annual rainfall (Fig. 7). Interestingly, the closest sister species to Brachysaura minor, Calotes jerdoni is distributed in North Eastern India, Myanmar and Bhutan (Smith 1935, Uetz & Hošek 2015).

Taxonomic implications
Subsuming Brachysaura into Calotes warrants reassessment of diagnostic characters for the genus Calotes. This is because many of the characters used to differentiate between Pseudocalotes, Calotes and Bronchocela are body ratios (Hallermann & Bӧhme 2000). However B. minor is unique among Calotes in that it has body ratios that are very different from other Calotes spp. This study shows that there are unique hemipenial characters that can be used to diagnose the genus Calotes. Though the osteology of agamids is well documented in Moody (1980), it requires extensive revision in the light of new advances in agamid taxonomy. Further studies are required on both hemipenis and osteology to resolve taxonomic ambiguities and for a better understanding of the evolutionary relationships within Draconinae.
The inclusion of genus Brachysaura to Calotes will not have much taxonomic implications for Brachysaura minor, which becomes Calotes minor (Hardwicke & Gray 1827). Although Gray (1845) listed Agama minor in the synonymy of Calotes minor but the latter is a different agamid, presently considered as Oriocalotes paulus (Günther 1864, Smith 1935, Ananjeva et al. 2011). The specimens of O. paulus referred by Gray (1845) under C. minor were misidentified and they were not types of the new species. The interpretation by Smith (1935) was wrong, which was corrected by Wermuth (1967). Thus the name Calotes minor is not preoccupied and is available for Brachysaura minor.

Conclusions
Convergence in morphological characters driven by its ground dwelling habits probably caused confusion in the genus allocation of Brachysaura minor. This highlights the need to revise diagnostic characters for the genus Calotes. The genus Trapelus and Bufoniceps are the only Agaminae found in Western India. Therefore our finding also limits the distribution of members of Agaminae to the arid regions ( <  500 mm rainfall) of Western India.