Abstract
A small-sized tree frog of the genus Rhacophorus is described on the basis of 18 specimens collected from three different localities on Sumatra Island, Indonesia. Rhacophorus indonesiensis sp. nov. is divergent from all other Rhacophorus species genetically and morphologically. The new species is distinguished from its congeners by a combination of: the presence of black spots on the ventral surfaces of the hand and foot webbing, an absence of vomerine teeth, a venter with a white kite-shaped marking, raised white spots on the dorsum or on the head, and a reddish brown dorsum with irregular dark brown blotches and distinct black dots. With the addition of this new species, fifteen species of Rhacophorus are now known from Sumatra, the highest number of species of this genus in the Sundaland region. However, with the increasing conversion of forest to oil palm cultivation or mining, the possibility of the extinction of newly described or as yet undiscovered species is of great concern. 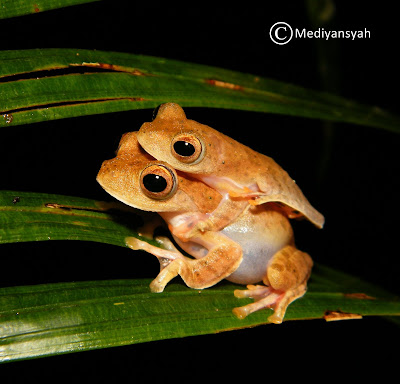