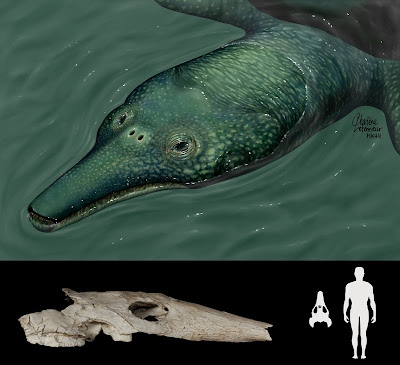 Background
Secondary adaptation to aquatic life occurred independently in several amniote lineages, including reptiles during the Mesozoic and mammals during the Cenozoic. These evolutionary shifts to aquatic environments imply major morphological modifications, especially of the feeding apparatus. Mesozoic (250–65 Myr) marine reptiles, such as ichthyosaurs, plesiosaurs, mosasaurid squamates, crocodiles, and turtles, exhibit a wide range of adaptations to aquatic feeding and a broad overlap of their tooth morphospaces with those of Cenozoic marine mammals. However, despite these multiple feeding behavior convergences, suction feeding, though being a common feeding strategy in aquatic vertebrates and in marine mammals in particular, has been extremely rarely reported for Mesozoic marine reptiles.

Principal Findings
A relative of fossil protostegid and dermochelyoid sea turtles, Ocepechelon bouyai gen. et sp. nov. is a new giant chelonioid from the Late Maastrichtian (67 Myr) of Morocco exhibiting remarkable adaptations to marine life (among others, very dorsally and posteriorly located nostrils). The 70-cm-long skull of Ocepechelon not only makes it one of the largest marine turtles ever described, but also deviates significantly from typical turtle cranial morphology. It shares unique convergences with both syngnathid fishes (unique long tubular bony snout ending in a rounded and anteriorly directed mouth) and beaked whales (large size and elongated edentulous jaws). This striking anatomy suggests extreme adaptation for suction feeding unmatched among known turtles.

Conclusion/Significance
The feeding apparatus of Ocepechelon, a bony pipette-like snout, is unique among tetrapods. This new taxon exemplifies the successful systematic and ecological diversification of chelonioid turtles during the Late Cretaceous. This new evidence for a unique trophic specialization in turtles, along with the abundant marine vertebrate faunas associated to Ocepechelon in the Late Maastrichtian phosphatic beds of Morocco, further supports the hypothesis that marine life was, at least locally, very diversified just prior to the Cretaceous/Palaeogene (K/Pg) biotic crisis.

Etymology: Genus name from OCP, acronym for the Groupe Office Chérifien des Phosphates, the mining company exploiting phosphatic deposits in Morocco, and from Χελώνη (chelone), meaning turtle in Greek; species name from Mr. Baâdi Bouya, engineer geologist, head of the OCP Geological Survey in Khouribga, for his help during our fieldwork.

Conclusion
During the Mesozoic, large marine carnivorous reptiles such as ichthyopterygians, sauropterygians, mosasaurid squamates and crocodyliformes exhibited a wide range of feeding strategies based on their tooth morphologies, from benthic crushing feeders to huge open-sea generalist predators. However, despite this considerable diversity in the Mesozoic marine reptile modes of predation, as well as a broad overlap of their tooth morphospaces with those of Cenozoic marine mammals, indicating multiple feeding behavior convergences, suction feeding, though being a common feeding strategy in aquatic vertebrates has been extremely rarely reported among Mesozoic marine reptiles. It has been hypothesized (but without any concrete argument) for Hupesuchus, a small marine reptile from the Middle Triassic of China and recently postulated for Shonisaurus and Shastasaurus, both large toothless Triassic ichthyosaurs, interpreted as suction feeders also comparable to many extant odontocetes.

The unique anatomy and ecology of Ocepechelon suggest a prey capture behavior similar to that of several extant suction feeding odontocetes. Furthermore it is the only bony pipette-feeder ever reported among tetrapods. Irrespective of its feeding strategy, Ocepechelon dramatically illustrates the anatomical and taxonomic diversification of chelonioid turtles during the Late Cretaceous (Figures 6, 7). It combines turtle morphology with a feeding device that parallels the adaptation of modern pipefishes and some living odontocetes.

With its peculiar morphology, Ocepechelon likely occupied a different ecological niche compared to other coeval marine reptiles. Its specialization further emphasizes the tremendous diversity that prevailed among the fishes and reptiles in the shallow marine environments of the Late Maastrichian Phosphates of Morocco, shortly before the K/Pg mass extinction event.