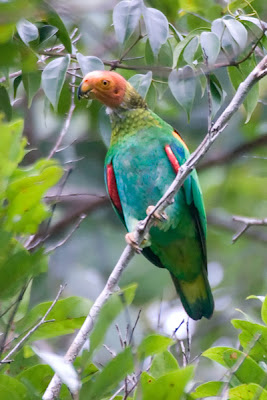 Abstract
A new species from Brazil — Pionopsitta aurantiocephala — is described, which is easily distinguished from the other species of that genus by its completely bare, intensely orange colored head. Specimens of this species have been historically identiﬁed as immatures of P. vulturina, which occur in simpatry with P. aurantiocephala on the Middle Tapajo´ s River and possibly on the Lower Madeira River. The description of a new species of Psittacidae stresses the importance of new studies in the regions of the Madeira and Tapajo' s rivers.

Etymology. The proposed name is designed to highlight the diagnostic orange bare-headed characteristic of the species.