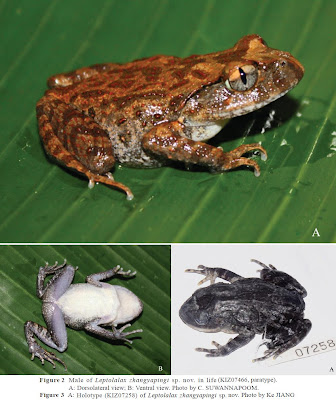 Etymology: Following the Chinese style of placing the given name after the family name, the species is named after Prof. Yaping Zhang, the sponsor of the international “COLD CODE” program of DNA barcoding amphibians and reptiles. We acknowledge his continuous support and encouragement of our biodiversity survey in southeastern Asia. Its common name is suggested as Zhang’s Asian Toad.

Discussion
The genus Leptolalax has been considered to contain a high proportion of cryptic diversity (Rowley et al., 2010a, b). Our result clearly supports this view and one more new species, L. zhangyapingi is described here based on its diagnosable morphological characters.

Presently, there are 37 described species in total in this genus, including L. zhangyapingi. However, most of them were studied based on morphology only, not combined with acoustic data and molecular data. Recently, the discovery of new species is increasing mostly aided by molecular tool (Rowley et al., 2010a, 2010b; Ohler et al., 2011). Combined with the sequences available in this genus (Ohler et al., 2011; Rowley et al., 2012), our phylogenetic tree recovered the new described species as one clearly distinct lineage, which largely diverges from other known species as shown in Figure 1.

In conclusion, at present seven described species of Leptolalax exist in Thailand, L. fuliginosus and L. gracilis in the southwest, L. heteropus and L. solus in the south, L. melanoleucus in the southwest and south, L. minimus and L. zhangyapingi sp. nov. in the north (Chan-ard, 2003; Das et al., 2010; Frost, 2013; Matsui, 2006; Nabhitabhata et al., 2000; Ohler et al., 2011). L. pelodytoides and L. bourreti are now restricted to the Karin Hills of Myanmar and Vietnam, respectively indicated by Ohler et al. (2011). Both of them were considered to exist in Thailand by Das et al. (2010). Recently, Ohler et al. (2011) resurrected L. minimus which was described from Chiang Mai Province, Thailand by Taylor (1962), and was considered to be a junior synonym of L. oshanensis by Dubois (1981).