Abstract
A new species of the genus Aceratherium, A. porpani sp. nov., from the Tha Chang sand pits in Nakhon Ratchasima Province, northwestern Thailand, is described. It is a mid-sized rhinocerotid in the subfamily Aceratheriinae, and represents the ﬁrst discovery of Aceratherium in Thailand. The material includes a well-preserved skull and mandible. A. porpani has broadly separated parietal crests, slightly expanded zygomatic arches, a straight nuchal crest, moderate supraorbital tuberosities, a ﬂat skull roof, a deep nasal notch above the P4/M1 boundary, a moderately wide mandibular symphysis with a posterior border at the p3/p4 boundary, a short diastema between i2 and p2, absence of DP1 and dp1, strong crochets, constricted molar protocones, and long metalophs. This new species has a mixture of primitive and derived characters that differ from the known species of Aceratherium, A. incisivum, and A. depereti. The evolutionary stage of A. porpani is consistent with the latest Miocene age of the associated fauna and ﬂora in the Tha Chang sand pits.

Etymology: In honor of Porpan Vachajitpan, who donated the studied holotype and paratype specimens of this new species 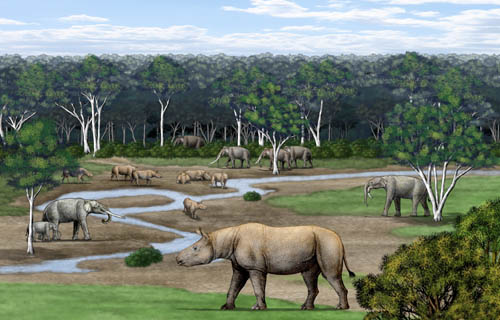 In the Tha Chang area, Nakhon Ratchasima Province, Thailand, several sand pits previously have yielded fossils. The area is 220 km northeast of Bangkok, and the sand pits are located next to the Mun River. The sedimentary sequence of these sand pits consists of unconsolidated mudstone, sandstone, and conglomerate, deposited by the ancient Mun River. Almost all the fossils have been found and collected by local villagers working in these sand pits, and they have been brought to public institutions such as Nakhon Ratchasima Rajabhat University. Consequently, precise field information is unavailable for most of the fossils from the Tha Chang area, including the type mandible of the recently described new hominoid Khoratpithecus piriyai.

Dr. DENG Tao from Institute of Vertebrate Paleontology and Paleoanthropology (IVPP), Chinese Academy of Sciences, and his Thai colleagues from Nakhon Ratchasima Rajabhat University studied the rhino fossils collected from the Tha Chang sand pits and described them as a new species of the subfamily Aceratheriinae, Aceratherium porpani sp. nov. Its holotype is an adult skull without premaxillae and the anterior portion of nasals, and its paratype is an almost complete mandible. Her Royal Highness Princess Sirindhorn of Thailand was interested in this study and watched the holotype of A. porpani when Dr. Deng and his Thai colleagues studied these fossils in Nakhon Ratchasima. The study is published online June 26, 2013 in Journal of Vertebrate Paleontology.