The diet of Eonycteris spelaea was determined for bats captured monthly between June 2002-June 2003 at a cave entrance in Songkhla Province, Southern Thailand. Faecal analysis and pollen collected from the bats’ fur were used to identify the plant species ingested. From 1,155 diet records from 506 samples, at least eleven plant taxa were identified. Individual bats feed on flowers of up to six plant species each night. Parkia spp. (34%) and Musa spp. (28%) have the highest percentage frequency followed by Eugenia spp. (9.4%), Oroxylum indicum (6.4%), Durio zibethinus (6.2%), Ceiba pentandra (5.5%), Sonneratia spp. (5.2%), while Cocos nucifera and an unknown plant species, made up a minor proportion (<2.5%). Parkia and Musa were the main dietary items of E. spelaea in nearly every month, while the remaining components of the diet varied seasonally. Durio spp. is an important contributor to the diet during March–April (39–42%). The results from pollen collected from fur generally corresponded with those from faecal analysis, but Musa spp. had a higher percentage frequency on the fur (34%) than Parkia spp. (23%). The dawn return patterns of the bats to their roosts differ significantly between sexes. Most mature males return early in the night while most females return at dawn. Earlier returning males were significantly heavier than those returning later. This return pattern is similar to that reported during the breeding period for those polygynous fruit bats that maintain a harem. Thus, these results suggest that E. spelaea may exhibit a resource-defence polygynous mating system. 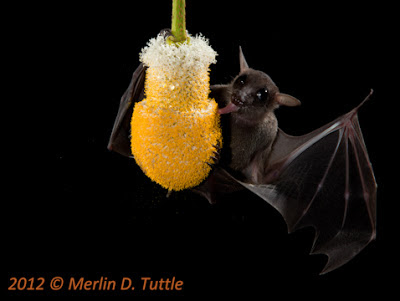