Abstract
Nyx Harbach & Linton, gen. nov., is introduced as a new mosquito genus of tribe Aedini for a previously unknown cavedwelling species, Nyx pholeocola Linton & Harbach, sp. nov., from southern Thailand. A diagnosis of the genus is provided that features unique anatomical characters of the adult, pupal and larval stages of the type species. The affinities of Nyx are discussed in terms of its position in the phylogeny of Aedini. Nyx is more closely related to Borichinda and Isoaedesthan to other genera of tribe Aedini. Salient differences that distinguish these three genera are contrasted. The male and female genitalia, pupa and fourth-instar larva of the new species are illustrated. DNA sequence for the second nuclear internal spacer region (ITS2) and the 658-bp barcode fragment of the mitochondrial cytochrome c oxidase I (COI) gene reveal very low similarity with published sequences, supporting the unique status of the new species.

Introduction
Biting adults and immature stages of the new species described in this paper were discovered in the cave at Wat Tham Phanturat, Khlong Sok, near Khao Sok National Park in Surat Thani Province of southern Thailand. Adults reared from these larvae were initially found to be similar to species of genera Borichinda and Isoaedes using the keys of Rattanarithikul et al. (2010) for the aedine fauna of Thailand. Upon closer examination of the adults and their associated larval and pupal exuviae, it became obvious that the species was very different from the species of those genera. Furthermore, comparisons of COI and ITS2 sequences with the extensive collection of COI barcodes in the Barcode of Life Database (BOLD; www.boldsystems.org) and GenBank, respectively, showed that the species does not fall within any currently recognized genus-level taxon of Aedini, and therefore a new genusspecies combination is proposed and described herein. 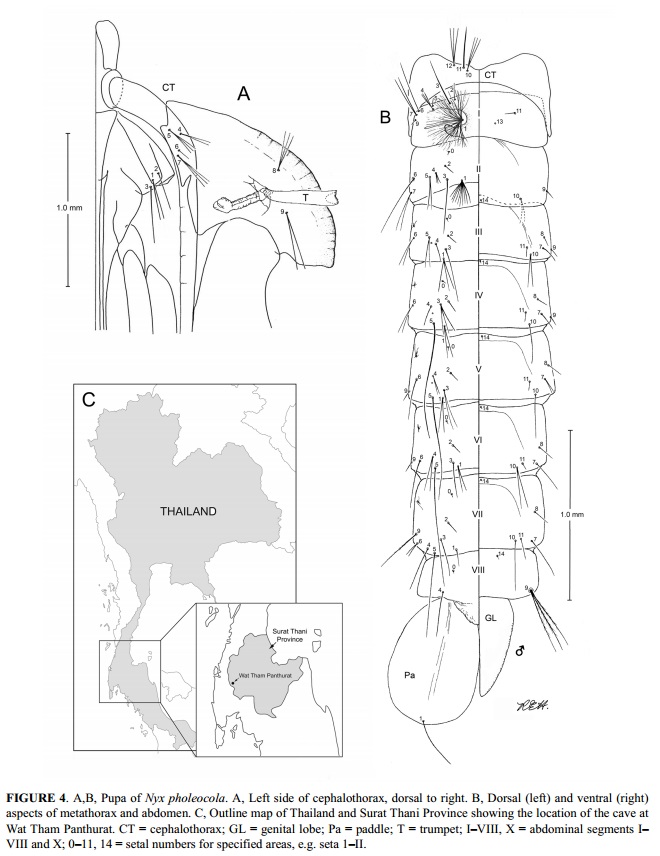 Etymology. Nyx is the Greek goddess of the night – a shadowy figure who stood at or near the beginning of creation and gave birth to a number of personified gods. Her sparse appearances in mythology reveal her as a goddess of exceptional power and beauty. Nyx was rarely and only glimpsed in the shadows of the world, which prompted the generic name proposed here. The two-letter abbreviation Nx. is recommended for this genus.

Etymology. The name pholeocola is a Latin noun (masculine or feminine) derived from pholeos, meaning
hole, cave or den, and -cola, meaning dweller or inhabitant. It was chosen because the species was discovered in and is only known to inhabit the cave at Wat Tham Phanturat in Khlong Sok, near Khao Sok National Park in southern Thailand (see below). The specific name is feminine in agreement with the gender of Nyx.

Bionomics. Larvae and pupae of Nx. pholeocola were collected from a rimstone pool (20 x 50 cm) in Wat Tham Phanturat cave, Khlong Sok, near Khao Sok National Park in Surat Thani Province in southern Thailand. The water in the pool was clear and cold, 10 cm deep and devoid of vegetation and plant matter. The cave harbours an enormous number of bats that are likely to be the primary source of food for adult females. Females, however, avidly attacked collectors inside the cave; thus, Nx. pholeocola may have the potential to opportunistically transmit zoonotic pathogens between bats and humans.

Distribution. Nyx pholeocola is only known from the cave at Wat Tham Phanturat Khlong Sok, near the Khao Sok National Park in the Surat Thani Province of southern Thailand (Fig. 4C).