[Paleontology • 2013] Eurazhdarcho langendorfensis • A New Azhdarchid Pterosaur from the Late Cretaceous of the Transylvanian Basin, Romania: Implications for Azhdarchid Diversity and Distribution 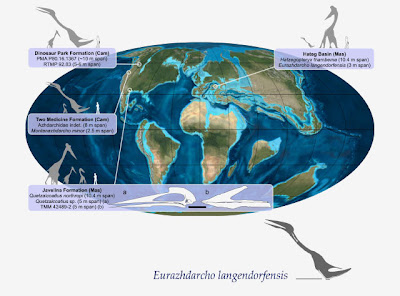 We describe a new taxon of medium-sized (wing span ca. 3 m) azhdarchid pterosaur from the Upper Cretaceous Transylvanian Basin (Sebeş Formation) of Romania. This specimen is the most complete European azhdarchid yet reported, comprising a partially articulated series of vertebrae and associated forelimb bones. The new taxon is most similar to the Central Asian Azhdarcho lancicollis Nessov but possesses a suite of autapomorphies in its vertebrae that include the relative proportions of cervicals three and four and the presence of elongated prezygapophyseal pedicles. The new taxon is interesting in that it lived contemporaneously with gigantic forms, comparable in size to the famous Romanian Hatzegopteryx thambema. The presence of two distinct azhdarchid size classes in a continental depositional environment further strengthens suggestions that these pterosaurs were strongly linked to terrestrial floodplain and wooded environments. To support this discussion, we outline the geological context and taphonomy of our new specimen and place it in context with other known records for this widespread and important Late Cretaceous pterosaurian lineage.

68-million-year-old fossil, named Eurazhdarcho langendorfensis, were collected from the Late Cretaceous rocks of Sebeş-Glod in the Transylvanian Basin, Romania.

“Eurazhdarcho belong to a group of pterosaurs called the azhdarchids. These were long-necked, long-beaked pterosaurs whose wings were strongly adapted for a soaring lifestyle. Several features of their wing and hind limb bones show that they could fold their wings up and walk on all fours when needed,” said Dr Darren Naish of the University of Southampton, who helped identify the new species and co-author a paper in the journal PLoS ONE.

“With a three-meter wingspan, Eurazhdarcho would have been large, but not gigantic. This is true of many of the animals so far discovered in Romania; they were often unusually small compared to their relatives elsewhere.”

The discovery is the most complete example of an azhdarchid found in Europe so far, and its discovery supports a long-argued theory about the behavior of these types of creatures.

“Experts have argued for years over the lifestyle and behavior of azhdarchids. It has been suggested that they grabbed prey from the water while in flight, that they patrolled wetlands and hunted in a heron or stork-like fashion, or that they were like gigantic sandpipers, hunting by pushing their long bills into mud,” explained senior author Dr Gareth Dyke of the National Oceanography Center Southampton.

“One of the newest ideas is that azhdarchids walked through forests, plains and other places in search of small animal prey. Eurazhdarcho supports this view of azhdarchids, since these fossils come from an inland, continental environment where there were forests and plains as well as large, meandering rivers and swampy regions.”

Fossils from the region show that there were several places where both giant azhdarchids and small azhdarchids lived side by side. Eurazhdarcho's discovery indicates that there were many different animals hunting different prey in the region at the same time, demonstrating a much more complicated picture of the Late Cretaceous world than first thought.