Abstract
The avifauna of Indonesia is one of the richest in the world but the taxonomic status of many species remains poorly documented. The sole species of scops owl known from Lombok has long been assigned to the widespread Moluccan Scops Owl Otus magicus on the basis of superficial similarities in morphology. Field work in 2003 has shown that the territorial song of the scops owls inhabiting the foothills of Gunung Rinjani differs dramatically from that of O. magicus and is more similar to those of Rufescent Scops Owl O. rufescens and Singapore Scops Owl O. cnephaeus. Detailed comparisons of sound recordings and museum specimens with those of other scops owls in Wallacea and the Indo-Malayan region have confirmed the distinctiveness of the Lombok population. We describe Otus jolandae as a new species, the Rinjani Scops Owl. It is locally common at elevations from 25–1350 m. and occurs within Gunung Rinjani National Park. The new species is known from seven specimens collected by Alfred Everett in 1896. Otus jolandae represents the first endemic bird species from Lombok. 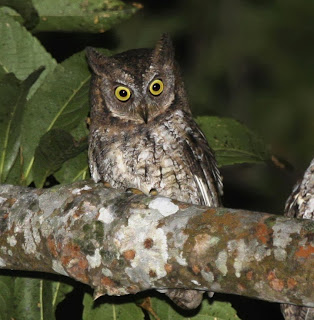 Etymology: Named after GS’s wife, Dr Jolanda A. Luksenburg, a biologist at George Mason University, Fairfax, Virginia, USA, who co-discovered the species in 2003 and contributed much to the field work that led to the description of Caprimulgus meesi.