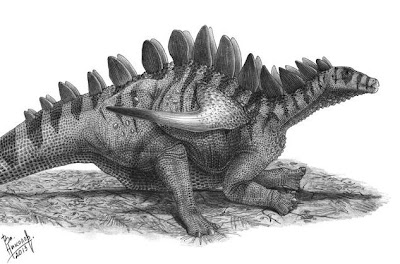 Gigantspinosaurus (meaning "giant-spined lizard")
a genus of herbivorous ornithischian dinosaur from the Late Jurassic. It was a stegosaur found in Sichuan, China.

The first fossil was found in 1985 by Ouyang Hui at Pengtang near Jinquan and was reported upon in 1986 by Gao Ruiqi and colleagues, mistaking it for a specimen of Tuojiangosaurus. The type species, Gigantspinosaurus sichuanensis, was described and named by Ouyang in 1992 in an abstract of a lecture.

The generic name is derived from Latin gigas or giganteus, "enormous", and spina, "spine", in reference to the gigantic shoulder spines. The specific name refers to Sichuan.
http://en.wikipedia.org/wiki/Gigantspinosaurus 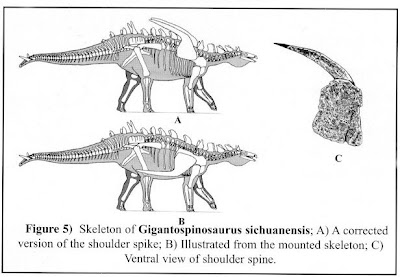 Ouyang, H. 1992. Discovery of Gigantspinosaurus sichanensis and its scapular spine orientation. Abstracts and Summaries for Youth Academic Symposium on New Discoveries and Ideas in Stratigraphic Paleontology (in Chinese). 47–49.