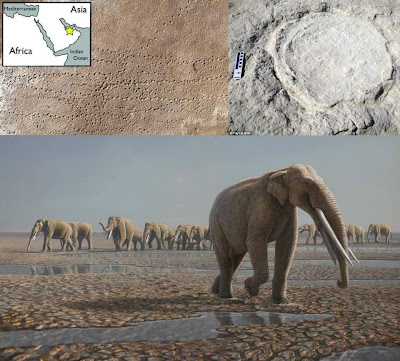 Many living vertebrates exhibit complex social structures, evidence for the antiquity of which is limited to rare and exceptional fossil finds. Living elephants possess a characteristic social structure that is sex-segregated and multi-tiered, centred around a matriarchal family and solitary or loosely associated groups of adult males. Although the fossil record of Proboscidea is extensive, the origin and evolution of social structure in this clade is virtually unknown. Here, we present imagery and analyses of an extensive late Miocene fossil trackway site from the United Arab Emirates. The site of Mleisa 1 preserves exceptionally long trackways of a herd of at least 13 individuals of varying size transected by that of a single large individual, indicating the presence of both herding and solitary social modes. Trackway stride lengths and resulting body mass estimates indicate that the solitary individual was also the largest and therefore most likely a male. Sexual determination for the herd is equivocal, but the body size profile and number of individuals are commensurate with those of a modern elephant family unit. The Mleisa 1 trackways provide direct evidence for the antiquity of characteristic and complex social structure in Proboscidea.

In the footsteps of prehistoric elephants
Seven-million-year-old footprints from the Arabian Desert provide the oldest known evidence of how elephant ancestors interacted socially.

The Mleisa 1 site in the United Arab Emirates features exceptionally long trackways of a single herd of at least 13 elephant individuals. The herd walked through mud and left footprints that hardened, were buried, and then re-exposed by erosion. Analysis of trackway stride lengths reveals the herd contained a diversity of sizes, from adults to a young calf, making this the earliest direct evidence of social structure in prehistoric elephants ever discovered.

“Basically, this is fossilized behavior,” says Bibi, “This is an absolutely unique site, a really rare opportunity in the fossil record that lets you see animal behavior in a way you couldn’t otherwise do with bones or teeth.”

Not only were the prehistoric elephants herding, but a 260m-long trackway of a solitary male at the same site indicates they also differentiated into solitary and social groups, and that these might have been sex-segregated just like in elephants today. In living elephants, adult females lead the herds while males disperse at sexual maturity and come back only to mate; such behavior is also suggested at the Mleisa 1 site.

“The Mleisa 1 fossil trackways are the most extensive ever recorded for mammals,” said William Sanders, a paleontologist at the University of Michigan who was not involved in the study. “Bibi et al.’s analysis is an exemplary and comprehensive example of what can be garnered from ancient footprints.”

Mleisa 1 is one of the largest trackway sites in the world, covering an area of 5 hectares. Though the site had been known for some time, it was only when the scientists photographed it from the air that its significance became clear.

“Once we saw it aerially, it became a much different and clearer story,” Kraatz said. “Seeing the whole site in one shot meant we could finally understand what was happening.”

Co-author Nathan Craig used a camera-mounted kite to take hundreds of aerial photos that were then digitally stitched together to form a highly accurate photomosaic of the site [viewable here: http://gigapan.org/gigapans/78542].

Mleisa 1 is one of many fossil sites of the Baynunah Formation, a sequence of mostly riverdeposited sands that is widely exposed over the Al Gharbia region of Abu Dhabi Emirate. Most Baynunah sites have yielded fossilized bones showing a diversity of animals lived in the Arabian Peninsula in the late Miocene Epoch, between 6 and 8 million years ago. The Baynunah rocks and fossil indicate that at this time, a river system came across the Arabian Peninsula through what is today the United Arab Emirates. The freshwater ecosystem supported a thriving African-like fauna during that time. The river subsequently dried up and those animals disappeared with that river system, including the elephant ancestors whose prints are preserved at Mleisa 1. The Baynunah Formation sites in Abu Dhabi Emirate are the only such fossil sites known from this time period from the entire Arabian Peninsula.

"The trackways are visually stunning.” says co-author Andrew Hill. “It is quite obvious to anyone, without any technical knowledge, that these are the footprints of very large animals, and to learn that they are over 6 Ma old presents a visitor with the sensation of walking back in time, across a Miocene landscape where elephants might have strolled by just a little time before."