Since its original description by Mertens in 1941, Varanus spinulosus has remained one of the most poorly known varanids.  It is known only from two museum specimens with precise locality data, the type specimen from San Jorge (Solomon Islands) NMW 23387, and another from Cape Torokina, Bougainville (PNG) USNM 120886.  An additional five specimens with imprecise locality data from Isabel Island (SI) were imported to the United States in the early 1990s (Sprackland, 1993) bringing the total number up to seven known specimens.  A published photograph credited to a Malaysian animal dealer (Bennett, 1995) and personal communications with reptile dealers in Indonesia (J Gorman, pers. comm.) suggest that there may be more specimens in captivity.

Recent observations on the hemipeneal morphology of V. spinulosus have demonstrated that it is not a member of the V. indicus complex, as previously thought and its taxonomic standing is not currently understood (Böhme and Ziegler, 2007). The distribution of V. spinulosus is also poorly understood. At the time of writing, it has only been formally documented from Bougainville, Isabel and San Jorge. The range map in Eidenmüller and Philippen (2007) which includes the Louisiade Archipelago is an error according to the author (Eidenmüller, pers. comm.) and a photo of a live animal taken at the Charapoana Resort on Charapoana Island (Danielova and Daniel, 2001) is not considered a valid record either (Böhme and Ziegler, 2007). During the Pleistocene, Bougainville, Choiseul, Isabel and Nggela (= Florida Islands) were all connected (Mayr and Diamond, 2001), so the presence of V. spinulosus on Choiseul would not be surprising. Their occurrence in Nggela is less likely because these islands are much less remote and have been extensively collected by reptile traders. (A. Fafale, pers. comm.)

Due to the fact that exports of Corucia zebrata, once the staple of the SI reptile trade, have been banned, and the worldwide trade in live birds is coming to a close as well, the wildlife trade in the Solomon Islands has waned considerably in recent years and it seems unlikely that animal traders will turn up more specimens of V. spinulosus accidentally 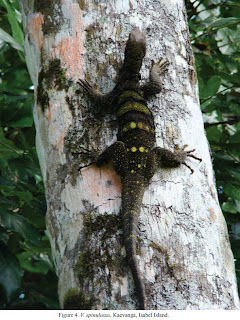