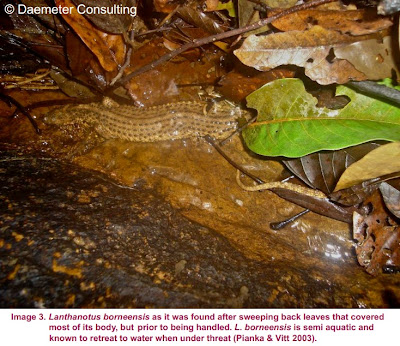 Image 3. Lanthanotus borneensis as it was found after sweeping back leaves that covered most of its body, but prior to being handled. L. borneensis is semi aquatic and known to retreat to water when under threat (Pianka & Vitt 2003). 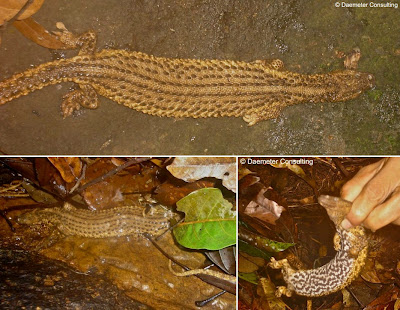 Abstract: The following paper presents the first published record of the cryptic Borneo Earless Monitor (Lanthanotus borneensis Steindachner, 1877) from West Kalimantan (Indonesian Borneo).  This sole member of the family Lanthanotidae is endemic to Borneo.  Since its description in 1877, all locality records of specimens refer to Sarawak (Malaysian Borneo).  The recent discovery of this “living fossil” in an oil palm estate under development in Landak District expands its known distribution southward to Kalimantan.  This paper (i) describes the circumstances of the discovery, characteristics of the individual and microhabitat structure in which it was found, (ii) provides results from local community interviews about the local distribution of the species, suggesting it is found more broadly in the Landak District and possibly elsewhere, and (iii) places this information in a broader context of current knowledge and high conservation value of L. borneensis.

Image 4. Lanthanotus borneensis laid out on a rock. The photo clearly displays the characteristic six longitudinal dorsal rows of enlarged scales that run from neck to tail-base on this species (Pianka & Vitt 2003).