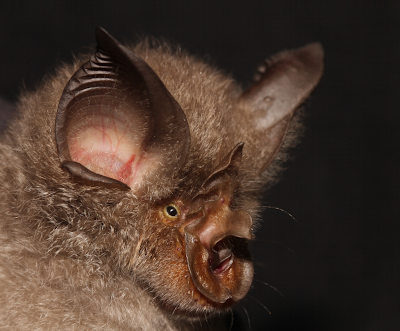 Smithers' Horseshoe Bat Rhinolophus smithersi
first collected in 2000 by Prof Taylor and Dr Cotterill in northwestern Zimbabwe. It has the highest echolocation frequency of all the members of  Rhinolophus hildebrandtii species-complex.

Abstract
Gigantism and dwarfism evolve in vertebrates restricted to islands. We describe four new species in the Rhinolophus hildebrandtii species-complex of horseshoe bats, whose evolution has entailed adaptive shifts in body size. We postulate that vicissitudes of palaeoenvironments resulted in gigantism and dwarfism in habitat islands fragmented across eastern and southern Africa. Mitochondrial and nuclear DNA sequences recovered two clades of R. hildebrandtii senso lato which are paraphyletic with respect to a third lineage (R. eloquens). Lineages differ by 7.7 to 9.0% in cytochrome b sequences. Clade 1 includes R. hildebrandtii sensu stricto from the east African highlands and three additional vicariants that speciated across an Afromontane archipelago through the Plio-Pleistocene, extending from the Kenyan Highlands through the Eastern Arc, northern Mozambique and the Zambezi Escarpment to the eastern Great Escarpment of South Africa. Clade 2 comprises one species confined to lowland savanna habitats (Mozambique and Zimbabwe). A third clade comprises R. eloquens from East Africa. Speciation within Clade 1 is associated with fixed differences in echolocation call frequency, and cranial shape and size in populations isolated since the late Pliocene (ca 3.74 Mya). Relative to the intermediate-sized savanna population (Clade 2), these island-populations within Clade 1 are characterised by either gigantism (South African eastern Great Escarpment and Mts Mabu and Inago in Mozambique) or dwarfism (Lutope-Ngolangola Gorge, Zimbabwe and Soutpansberg Mountains, South Africa). Sympatry between divergent clades (Clade 1 and Clade 2) at Lutope-Ngolangola Gorge (NW Zimbabwe) is attributed to recent range expansions. We propose an “Allometric Speciation Hypothesis”, which attributes the evolution of this species complex of bats to divergence in constant frequency (CF) sonar calls. The origin of species-specific peak frequencies (overall range = 32 to 46 kHz) represents the allometric effect of adaptive divergence in skull size, represented in the evolution of gigantism and dwarfism in habitat islands. 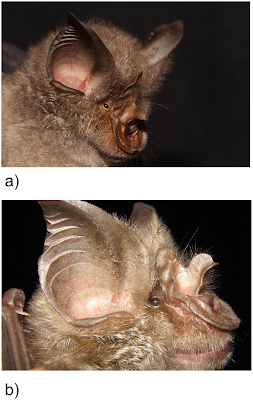 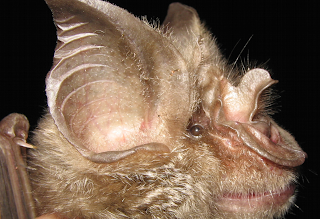 — • Mozambican Horseshoe Bat Rhinolophus mossambicus —
a medium-sized species in the complex. It appears widespread, recorded in Mozambique and northwest Zimbabwe.

"The Mozambican Horseshoe Bat is genetically a very distinct species from that of Rhinolophus hildebrantii," says Dr Samantha Stoffberg of Stellenbosch University. "It is probably widely distributed throughout Mozambique."

— • Mount Mabu Horseshoe Bat Rhinolophus mabuensis —
has so far only been found around Mount Mabu and Mount Inago in northern Mozambique, but could possibly also live in the nearby Malawi Rift, and Namuli, Chiperone and the Mulanje mountains.

The first museum specimens of this species were collected during an assessment of the biodiversity of mountains across northern Mozambique above 1500m, which was made possible through a British government funded Darwin Initiative award. The assessment project is coordinated by Dr Julian Bayliss. The area is known as one of Africa's most poorly explored territories.

"We chose this bat's name to draw attention to the serious threat to the unique biodiversity isolated on the montane forest islands in northern Mozambique, notably Mount Mabu and Mount Inago," says Dr Julian Bayliss of the Conservation Science Group at the University of Cambridge and the Mulanje Mountain Conservation Trust in Malawi. "None of these landforms lie within formally protected areas, and are all undergoing major habitat degradation and destruction from human activities such as timber harvesting and agriculural practices."

A veritable wealth of new, unique species of butterflies, snakes, crabs and chameleons have also recently been discovered on Mount Mabu, which has also turned out to be the largest rainforest in southern Africa. 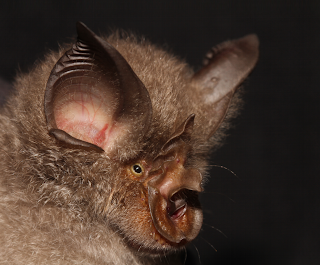 — • Smithers' Horseshoe Bat Rhinolophus smithersi —
first collected in 2000 by Prof Taylor and Dr Cotterill in northwestern Zimbabwe. It has the highest echolocation frequency of all the members of this species-complex.

"So far it seems to be only found in the northwestern regions of the Zambezi escarpment in Zimbabwe, and remote areas of the Kruger National Park around Pafuri, and the Soutpansberg Mountains in Limpopo," says Dr Woody Cotterill of Stellenbosch University.

"We need to study its distribution further to find out if it is more widespread across the savannah woodlands of the Limpopo and Zambezi valleys, and their escarpments."

Smithers' Horseshoe Bat is named after the late Dr Reay Smithers, founding director of the National Museums of Zimbabwe. The remarkable legacy of his commitment to taxonomy and museums is represented in the largest scientific collection of mammals in the Southern Hemisphere, in Bulawayo's Natural History Museum. Dr Smithers fostered its growth for over three decades.

His most well-known book, The Mammals of the Southern African Subregion, was first published in 1983, and was revised and reprinted again in 2005.

"He was a prodigious collector and researcher of mammals including bats, and the author of important regional texts on the mammals of Botswana, Zimbabwe and Mozambique," says Prof Taylor.

"We are naming this bat species after Ms Cohen to acknowledge her significant contribution towards the conservation and discovery of new bat species in South Africa, and particularly in Mpumalanga," says Prof Peter Taylor of the University of Venda.

Cohen's Horseshoe Bat (Rhinolophus cohenae) has the lowest call peak frequency of the five Rhinolophus species under investigation. It has a very wide noseleaf.

It is believed to only be found in the Mpumalanga province of South Africa, for instance in the Sudwala area near Nelspruit.

"I am not aware of any other bat species being endemic to Mpumalanga Province, which would make this species one of great conservation importance," adds Prof Taylor.