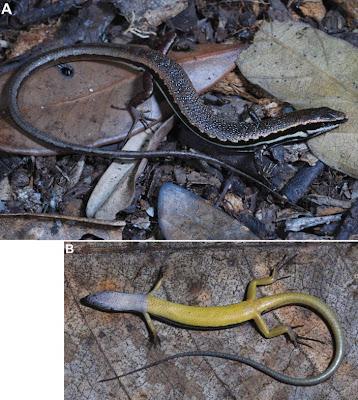 Abstract
A new species of skink in the genus Caledoniscincus is described from the northwest region of New Caledonia. It is known from two locations, one on the coast at Pointe de Vavouto north of Koné, the other on the slopes of the Massif d’Ouazangou, an isolated mountain 30 km to the north. Typical of all members of the genus, adult males and females of the new species are sexually dichromatic. The new species, Caledoniscincus constellatus sp. nov., has a bold, white midlateral stripe, a feature which distinguishes it from most other species of Caledoniscincus except the regionally sympatric C. haplorhinus (Günther) and C. austrocaledonicus (Bavay), from which it can be distinguished by a unique pattern of contact between the pale midlateral stripe and the ear. DNA sequence data for the ND2 mitochondrial gene identifies a high level of genetic differentiation between the new species and all other Caledoniscincus, further supporting its distinctiveness as  an independent evolutionary lineage. The species is of high conservation concern given its restricted distribution in a region that has been, and will continue to be, heavily impacted by human occupation, and would be ranked as Critically Endangered under IUCN criteria.
Key words: New Caledonia, Scincidae, Endangered 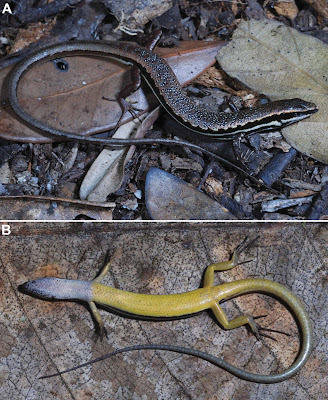 Etymology. The species epithet is Latin for studded with stars and refers to the pattern of white specks on the dorsal surface of males of the species.