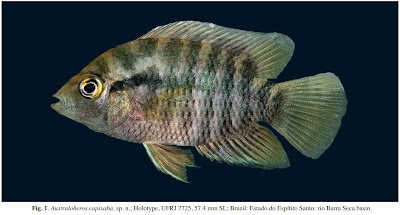 Abstract
Australoheros capixaba, new species, is distributed along the rio Itaúnas, rio Barra Seca, rio São Mateus and the lower rio Doce basins. The new species is distinguished from its congeners in the rio Paraná-Uruguay system and Laguna dos Patos system by having 12 caudal vertebrae (vs. 13 – 15). Australoheros capixaba differs from the other species of Australoheros from south-eastern Brazil by its coloration in life (a reddish chest, large spots on the dorsal region of the trunk and a green iridescence on the pelvic ﬁns). It also differs from some of its congeners by having a longer caudal peduncle, a longer anal-ﬁn spine, fewer dorsal-ﬁn spines and fewer anal-ﬁ n rays. Australoheros capixaba sp. n. is the ﬁ rst species from the genus described for the Estado do Espírito Santo, south-eastern Brazil. The phylogenetic placement of the species in the genus cannot be discussed, because there is no phylogenetic work about the Australoheros species from south-eastern Brazil.

Etymology. From the Brazilian idiomatic expression capixaba, meaning people who were born in the Estado de Espírito Santo.