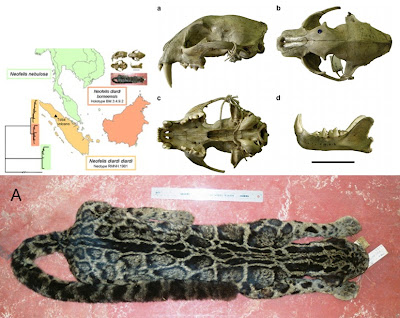 Abstract
Recent morphological and molecular studies led to the recognition of two extant species of clouded leopards; Neofelis nebulosa from mainland southeast Asia and Neofelis diardi from the Sunda Islands of Borneo and Sumatra, including the Batu Islands. In addition to these new species-level distinctions, preliminary molecular data suggested a genetic substructure that separates Bornean and Sumatran clouded leopards, indicating the possibility of two subspecies of N. diardi. This suggestion was based on an analysis of only three Sumatran and seven Bornean individuals. Accordingly, in this study we re-evaluated this proposed subspecies differentiation using additional molecular (mainly historical) samples of eight Bornean and 13 Sumatran clouded leopards; a craniometric analysis of 28 specimens; and examination of pelage morphology of 20 museum specimens and of photographs of 12 wild camera-trapped animals. Molecular (mtDNA and microsatellite loci), craniomandibular and dental analyses strongly support the differentiation of Bornean and Sumatran clouded leopards, but pelage characteristics fail to separate them completely, most probably owing to small sample sizes, but it may also reflect habitat similarities between the two islands and their recent divergence. However, some provisional discriminating pelage characters are presented that need further testing. According to our estimates both populations diverged from each other during the Middle to Late Pleistocene (between 400 and 120 kyr). We present a discussion on the evolutionary history of Neofelis diardi sspp. on the Sunda Shelf, a revised taxonomy for the Sunda clouded leopard, N. diardi, and formally describe the Bornean subspecies, Neofelis diardi borneensis, including the designation of a holotype (BM.3.4.9.2 from Baram, Sarawak) in accordance with the rules of the International Code of Zoological Nomenclature.


Conclusion
Following molecular and morphological results presented here, two subspecies of Neofelis diardi are recognised, namely Neofelis diardi diardi from Sumatra and the Batu Islands, and N. d. borneensis ssp. nov. from Borneo. Both subspecies should be protected and managed separately to preserve the integrity of their gene pools and their morphological distinctiveness. The IUCN already recognizes these subspecies based on the first suggestions by [Wilting et al., 2007a] and [Wilting et al., 2007b] and lists both as Endangered on the current IUCN Red List (Hearn et al., 2008b – N. d. borneensis, Sunarto et al., 2008 – N. d. diardi). This classification and the recognition of different subspecies is of utmost importance for conservation and management purposes, as these different conservation units represent an important component of the evolutionary legacy of this threatened pantherine felid species. 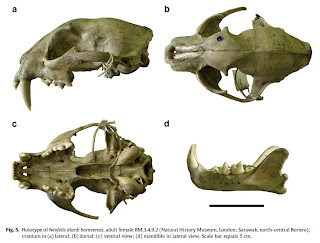 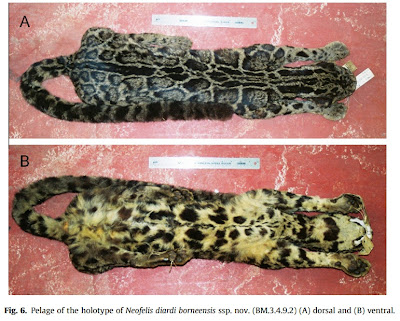