Abstract
Due to their reduced morphology, non-photosynthetic plants have been one of the most challenging groups to delimit to species level. The mycoheterotrophic genus Monotropastrum, with the monotypic species M. humile, has been a particularly taxonomically challenging group, owing to its highly reduced vegetative and root morphology. Using integrative species delimitation, we have focused on Japanese Monotropastrum, with a special focus on an unknown taxon with rosy pink petals and sepals. We investigated its flowering phenology, morphology, molecular identity, and associated fungi. Detailed morphological investigation has indicated that it can be distinguished from M. humile by its rosy pink tepals and sepals that are generally more numerous, elliptic, and constantly appressed to the petals throughout its flowering period, and by its obscure root balls that are unified with the surrounding soil, with root tips that hardly protrude. Based on genome-wide single-nucleotide polymorphisms, molecular data has provided clear genetic differentiation between this unknown taxon and M. humile. Monotropastrum humile and this taxon are associated with different Russula lineages, even when they are sympatric. Based on this multifaceted evidence, we describe this unknown taxon as the new species Monotropastrum kirishimense. Assortative mating resulting from phenological differences has likely contributed to the persistent sympatry between these two species, with distinct mycorrhizal specificity.
Keywords: Fungal association, Integrative taxonomy, Mycoheterotrophy, Mycorrhizas, Reproductive isolation, SNP data, Speciation, Species delimitation 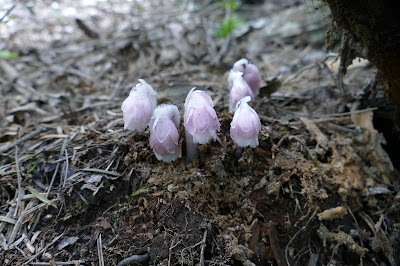 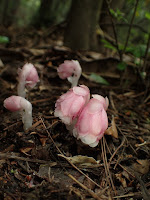 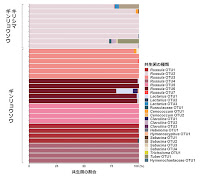 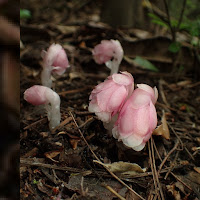