Abstract
The bony palate diagnoses the two deepest clades of extant birds: Neognathae and Palaeognathae. Neognaths exhibit unfused palate bones and generally kinetic skulls, whereas palaeognaths possess comparatively rigid skulls with the pterygoid and palatine fused into a single element, a condition long considered ancestral for crown birds (Neornithes). However, fossil evidence of palatal remains from taxa close to the origin of Neornithes is scarce, hindering strong inferences regarding the ancestral condition of the neornithine palate. Here we report a new taxon of toothed Late Cretaceous ornithurine bearing a pterygoid that is remarkably similar to those of the extant neognath clade Galloanserae (waterfowl + landfowl). Janavis finalidens, gen. et sp. nov., is generally similar to the well-known Mesozoic ornithurine Ichthyornis in its overall morphology, although Janavis is much larger and exhibits a substantially greater degree of postcranial pneumaticity. We recovered Janavis as the first-known well-represented member of Ichthyornithes other than Ichthyornis, clearly substantiating the persistence of the clade into the latest Cretaceous. Janavis confirms the presence of an anatomically neognathous palate in at least some Mesozoic non-crown ornithurines suggesting that pterygoids similar to those of extant Galloanserae may be plesiomorphic for crown birds. Our results, combined with recent evidence on the ichthyornithine palatine, overturn longstanding assumptions about the ancestral crown bird palate, and should prompt reevaluation of the purported galloanseran affinities of several bizarre early Cenozoic groups such as the ‘pseudotoothed birds’ (Pelagornithidae). 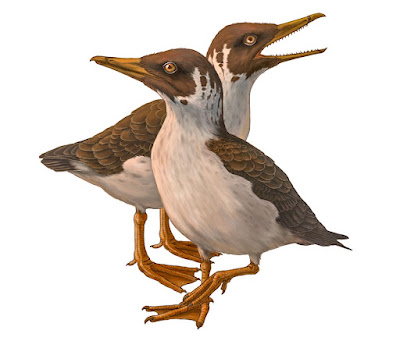 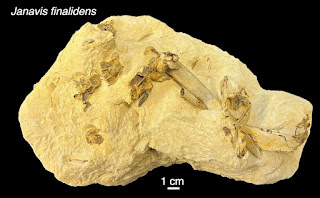 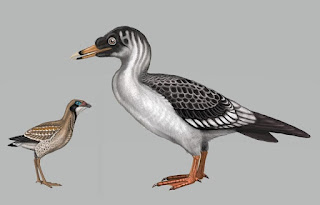 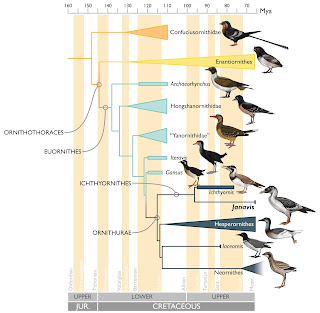 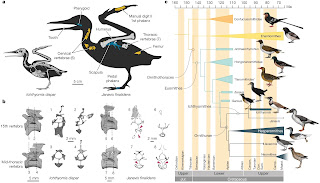 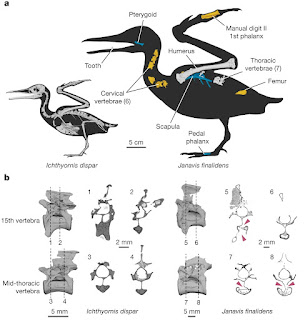 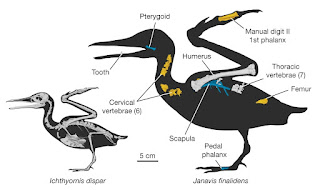 Avialae Gauthier, 1986 sensu Benito et al. 2022
Ornithurae Haeckel, 1866
Ichthyornithes Marsh, 1873 sensu Benito et al. 2022
Janavis finalidens, gen. et sp. nov.
Locality and age: CBR-Romontbos Quarry, Eben-Emael, Liège, Belgium. Valkenburg Member (67–66.9 million years ago), Maastricht Formation, late Maastrichtian, Late Cretaceous. Additional details regarding the locality and stratigraphic setting are provided in the Supplementary Information.
Diagnosis: Janavis is distinguished from other known Euornithes, and from Ichthyornis in particular, by the greater degree of pneumaticity of its thoracic vertebrae and ribs, especially the presence of large ventral pneumatic openings in the anterior thoracic vertebrae and fenestrated ventrolateral tubercles on the fifteenth presacral vertebra (Fig. 1b and Extended Data Figs. 1 and 3). It is also distinguished by the complete absence of an acromion process on the scapula (Extended Data Fig. 2d) and, most obviously, by its much larger size (maximum length of the Janavis humerus is 134.8 mm; maximum length of the longest known Ichthyornis humerus, YPM 1742, is 71.5 mm).
Etymology: Janavis from the Roman god Janus and the Latin avis for bird. In Roman mythology, Janus is the god of beginnings, endings and transitions, reflecting transitional aspects of the morphology of Janavis (combining plesiomorphic features such as teeth with a neognath-like palate) as well as its temporal provenance (deriving from the uppermost Cretaceous, making it one of the youngest non-neornithine avialan fossils in the world). The specific epithet finalidens, from the Latin finalis (adj.), meaning ending or final, and dens, for teeth, reflects the fact that the specimen is among the latest-known toothed avialans, which appear to have died out in the end-Cretaceous mass extinction shortly after Janavis lived. 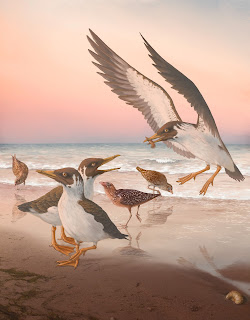 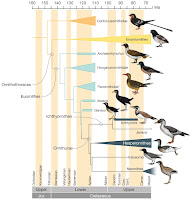