ABSTRACT
The genus Nothofagus (southern beech) has an extensive fossil record and extant species exclusively distributed in the Southern Hemisphere. It is divided into four subgenera widespread across eastern Australasia and southern South America. The origin and evolution among closely related species remain an important question in palaeontology. The goal of this work is to reconstruct the biogeography of Nothofagus incorporating a complete leaf fossil dataset to better understand its origin, diversification, and colonisation history. The most ancient fossil leaves were discovered in Antarctica and are herein included for the first time into phylogenetic and biogeographic analyses. We employed statistical biogeographic methods implemented in BioGeoBEARS to estimate ancestral areas. The results support a high probability that the ancient ancestor of Nothofagus may have originated in Antarctica during the Late Cretaceous which is also supported by the fossil pollen record found in the Antarctic Peninsula. Subgenera Fuscospora and Lophozonia resulted in the most ancient clades, while the subgenera Nothofagus and Brassospora evolved later (Palaeogene). Our model supports that subgenera divergences were characterised by both dispersal and vicariance events from the Late Cretaceous to the early–middle Eocene.
KEYWORDS: Nothofagaceae, fossil, leaves, phylogeny, biogeography, southern beech 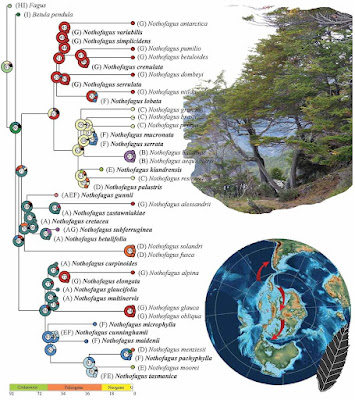