Abstract
The Pliocene–Pleistocene transition in the Neotropics is poorly understood despite the major climatic changes that occurred at the onset of the Quaternary. The San Gregorio Formation, the younger unit of the Urumaco Sequence, preserves a fauna that documents this critical transition. We report stingrays, freshwater bony fishes, amphibians, crocodiles, lizards, snakes, aquatic and terrestrial turtles, and mammals. A total of 49 taxa are reported from the Vergel Member (late Pliocene) and nine taxa from the Cocuiza Member (Early Pleistocene), with 28 and 18 taxa reported for the first time in the Urumaco sequence and Venezuela, respectively. Our findings include the first fossil record of the freshwater fishes Megaleporinus, Schizodon, Amblydoras, Scorpiodoras, and the pipesnake Anilius scytale, all from Pliocene strata. The late Pliocene and Early Pleistocene ages proposed here for the Vergel and Cocuiza members, respectively, are supported by their stratigraphic position, palynology, nannoplankton, and 86Sr/88Sr dating. Mammals from the Vergel Member are associated with the first major pulse of the Great American Biotic Interchange. In contrast to the dry conditions prevailing today, the San Gregorio Formation documents mixed open grassland/forest areas surrounding permanent freshwater systems, following the isolation of the northern South American basin from western Amazonia. These findings support the hypothesis that range contraction of many taxa to their current distribution in northern South America occurred rapidly during at least the last 1.5 million years.
Keywords: Neogene, Neotropics, Northern South America, Urumaco sequence, Paleodiversity, Megaleporinus, Amblydoras, Anilius, Camelidae, Chapalmalania 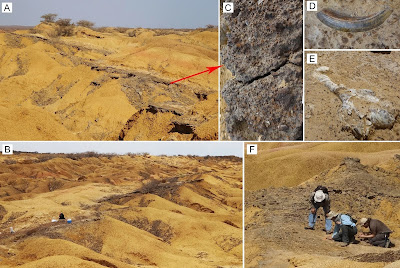 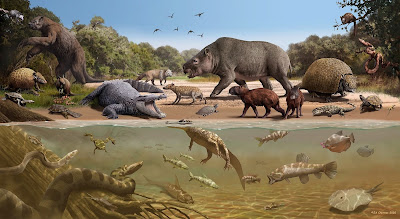 Conclusions:
A late Pliocene age is here suggested for the Vergel Member based on its stratigraphical position, palynological content, and the presence of the pampatheriid Plaina. A Pleistocene age (Calabrian) is suggested for the Cocuiza Member based on its nannoplankton content and the 86Sr/88Sr dating.
There are fossils of at least 55 aquatic and terrestrial taxa from two different localities of the San Gregorio Formation: 49 taxa from the Vergel Member and 9 taxa from the Cocuiza Member. From the overall paleodiversity, 28 and 18 fossil taxa are reported for the first time in the fossil record of the Urumaco sequence and Venezuela, respectively. Among them are the first fossil records of the freshwater taxa cf. Megaleporinus, Schizodon, cf. Amblydoras, cf. Scorpiodoras, and the pipesnake Anilius scytale, all from Pliocene strata of the Vergel Member.
The San Gregorio Formation preserves a diverse assemblage of taxa that lived in the Falcón region after the isolation of northern South American and western Amazon basins. Mixed open grassland/forest areas were surrounded by permanent freshwater systems, contrasting with the current dry environments in the Falcón region. The presence of the cis-Andean freshwater catfishes cf. Amblydoras, cf. Scorpiodoras, podocnemidid and Chelus sp. turtles, the Eunectes (anaconda) and pipesnake Anilius scytale snakes, as well as some caviomorph neoepiblemid rodents supports the hypothesis that geographical contraction to their extant distribution in northern South America occurred rapidly during at least the last 1.5 Ma. This could suggest marked environmental changes in the region during the early Quaternary and a subsequent extinction/extirpation process related to major climatic drying.
The rodent fauna from San Gregorio Formation (NCC locality) is the only Neogene unit from northern South America documenting the coexistence of caviomorphs (Hydrochoerinae, Neoepiblemidae, and Octodontoidea) and cricetids. This fauna shows the last appearance datum of Neoepiblemidae. To date, no dinomyids were found in such strata, a group quite diverse and abundant during the middle-late Miocene, which suggests that they were possibly in decline when the fossiliferous levels of the Vergel Member were accumulated. Cingulate and pilosan (Phyllophaga) xenarthrans from the Vergel Member are more closely related to the earliest South American immigrant taxa in Central and North America around the time when the Panamá Isthmus was fully established. Carrillo et al. (2018) overlapped the mammalian assemblage of the Vergel Formation with the second and third migratory GABI pulse. However, with the late Pliocene age proposed here for the Vergel Member, this assemblage would have to be reinterpreted within GABI 1.
The occurrence of interatheriids in Pliocene sediments of the San Gregorio Formation could suggest that this mammalian group survived early Neogene climate change inhabiting patchy, likely forested areas in tropical South America. This longer persistence time for basal notoungulates might confirm that tropical areas of northern South America could have been "cradles and museums" of biodiversity (e.g., Jablonski et al. 2006). However, confirmation of these paleobiogeographic patterns requires intensive fieldwork in order to (1) collect, more complete and better-preserved specimens, (2) to increase drastically the sampling effort in the highly vegetated tropics, and (3) for isotaphonomic analysis to rule out any sampling biases in the Neotropics. Based on data from these suggested studies, we will be able to determinate whether the tropics were indeed refugia for different clades that inhabited South America.
Jorge D. Carrillo-Briceño, Rodolfo Sánchez, Torsten M. Scheyer, Juan D. Carrillo, Massimo Delfino, Georgios L. Georgalis, Leonardo Kerber, Damián Ruiz-Ramoni, José L. O. Birindelli, Edwin-Alberto Cadena, Aldo F. Rincón, Martin Chavez-Hoffmeister, Alfredo A. Carlini, Mónica R. Carvalho, Raúl Trejos-Tamayo, Felipe Vallejo, Carlos Jaramillo, Douglas S. Jones and Marcelo R. Sánchez-Villagra. 2021. A Pliocene–Pleistocene Continental Biota from Venezuela. Swiss Journal of Palaeontology. 140: 9. DOI: 10.1186/s13358-020-00216-6
twitter.com/DrGeorgalis/status/1488211650167648264
เขียนโดย pskhun ที่ 9:37 PM