ABSTRACT
A new species of Cyrtodactylus is described from Tamenglong District in northwestern Manipur State, northeast India. The new species is diagnosed from other congeners based on a combination of morphological characters and molecular data (NADH dehydrogenase subunit 2 gene, ND2). Molecular analyses placed the new species as the sister taxon to C. montanus. Due to inconsistencies in the hierarchical clade terminology for Cyrtodactylus species in the Indo-Burma region, recommendations are made for stabilising the terminology and the names for various levels of clades. Based on this revised terminology, the new species was found to be nested within the gansi group of the khasiensis clade, within the Indo-Burma radiation of Cyrtodactylus. A large number of errors and inconsistencies in literature covering species of the Indo-Burma radiation were discovered, particularly in summary tables of measurements and meristic data. Other notable errors found included incorrect identifications of type specimens in figure captions, errors in museum catalogue numbers of type series, incorrect GPS coordinates for type localities, a variety of issues involving GenBank accession numbers and associated data, and many others. We highlight these specific errors and inconsistencies and attempt to clarify or correct them where possible. Suggestions and recommendations are given for authors, journal editors and reviewers on how to improve the accuracy and consistency of morphological and molecular data provided in taxonomic and molecular phylogenetic papers. We also encourage authors and scientific journals to follow or enforce the basic citation guidelines set by NCBI when using sequences downloaded from GenBank, which have been largely overlooked, or ignored. It is hoped that the issues discussed here will be taken as a reminder that errors in peer reviewed papers are an inevitability, and that users of this literature must always carefully assess the accuracy of others’ data when it is important for the interpretation of their results to reduce the propagation of errors in the literature.
KEYWORDS: Cyrtodactylus, lizard, herpetology, taxonomy, Genbank, literature errors 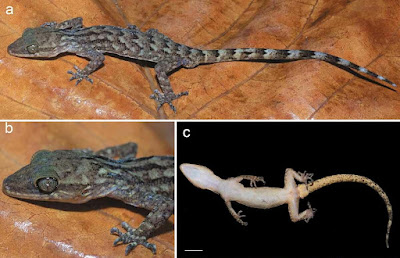 Cyrtodactylus namtiram Kamei and Mahony, sp. nov.
Taxonomy:
Based on the relatively deep genetic distance (Figure 2) between the newly collected Manipur specimens (BNHS 2751) and its closest relatives, and morphological evidence (presented below), we recognise it as a unique, previously unnamed species-level taxon. Despite only a single specimen being available for study, we justify the description of a new species based on this voucher for the following reasons: 1) the specimen is sufficiently morphologically diagnosable against all related taxa; 2) morphologically diagnostic new species of Cyrtodactylus are regularly described based on a single specimen (e.g. C. aequalis Bauer, 2003, C. chrysopylos, 2003, C. guwahatiensis Agarwal, Mahony, Giri, Chaitanya and Bauer, 2018, C. mandalayensis, C. meersi Grismer, Wood, Quah, Murdoch, Grismer, Herr, Espinoza, Brown and Lin, 2018, C. myaleiktaung, C. nyinyikyawi Grismer, Wood, Thura, Win and Quah, 2019; Agarwal et al. 2018b; Bauer 2003; Grismer et al. 2018c; 2018d, 2019a; Mahony 2009); 3) the species appears to occur in low density since three visits were made to the type locality and apparently suitable habitat was surveyed over several nights, but only a single specimen was found; 4) the species was found outside of the region’s protected area network, so it may be under threat from anthropogenic habitat modification. The formal description of the species is hoped to encourage efforts by herpetologists to extend surveys in the region to assess potential conservation threats to this gecko.
Etymology: The specific epithet is a toponym for the type locality of the species and is treated as a non-Latin noun in apposition. Northeast India witnessed continuous declines in forest and forest habitats due to various factors, but the rural communities are gradually becoming biodiversity conservation-oriented. Local communities are increasingly seeing their forests as a commodity with long-term value worth protecting. We name this species for its type locality to demonstrate the value of Namtiram’s forests as an important refuge for Manipur’s poorly explored biodiversity. We hope that naming the species after the Village will help promote a sense of ownership, pride, and relatability for the local community.
Suggested common name: Namtiram Bent-toed Gecko.
Stephen Mahony and Rachunliu G. Kamei. 2022 '2021'. A New Species of Cyrtodactylus Gray (Squamata: Gekkonidae) from Manipur State, northeast India, with A Critical Review highlighting extensive errors in Literature Covering Bent-toed Geckos of the Indo-Burma Region. Journal of Natural History. 55(39-40); 2445-2480. DOI: 10.1080/00222933.2021.1994667
Researchgate.net/publication/358429078_A_new_species_of_Cyrtodactylus_from_Manipur_State_northeast_India
เขียนโดย pskhun ที่ 10:18 PM