[Herpetology • 2022] Synapturanus danta • A Needle in A Haystack: Integrative Taxonomy reveals the Existence of A New Small Species of Fossorial Frog (Anura, Microhylidae) from the vast lower Putumayo Basin, Peru 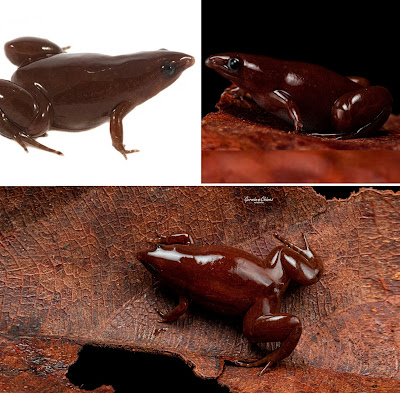 ﻿Abstract
We describe a new species of microhylid frog of the genus Synapturanus from the lower Putumayo basin in Loreto, Perú. Specimens inhabited the soils of stunted pole forests growing on peat. The new species is distinguished from other species of Synapturanus through morphology, genetics, and acoustic characteristics. This species differs from most nominal congeners by having a head flat in lateral view (vs convex in the rest of species), a characteristic only shared by S. rabus and S. salseri. The new species can be distinguished from S. rabus and S. salseri by a combination of morphological characters and by having an advertisement call with a note length of 0.05–0.06 seconds (vs 0.03 seconds in S. rabus) and a dominant frequency ranging from 1.73 to 1.81 kHz (vs 1.10–1.47 kHz in S. salseri). Principal component analyses of 12 morphological characters and three acoustic variables further support differences between the new species and its described and undescribed congeners.
Key Words: Acoustic, genetic, Loreto, morphology, peatland 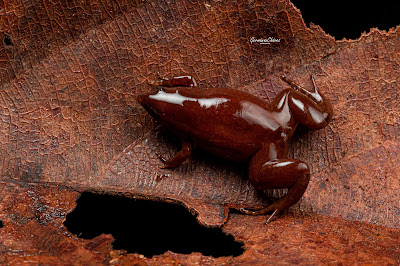 ﻿ Synapturanus danta sp. nov.
Deﬁnition and diagnosis:
(1) A small-sized Synapturanus (SVL of 17.6–17.9 mm in adult males, females unknown); (2) head dorsally flat in lateral view; (3) eyes small, slightly larger than half the size of the eye-naris distance; (4) ﬁngertips tapering without discs; (5) subarticular tubercles not visible on ﬁngers; (6) thenar tubercle indistinct, palmar tubercle distinct; (7) ﬁngers with preaxial and postaxial fringes (except preaxially on Finger IV), strongly visible on Fingers II and III pre and post axially; (8) toe tips slightly expanded in toes II and III; (9) inner metatarsal tubercle indistinct, outer metatarsal tubercle indistinct; (10) dorsal color pattern chocolate brown without spots or blotches, a stripe along the canthus rostralis and upper eyelid only present in juveniles; (11) throat and ventral surface of limbs cinnamon brown or pinkish brown, chest and belly cyan white; (12) call consisting of a tonal note 0.054–0.063 seconds in length with a slight downward frequency modulation (delta 0–94 Hz) and a dominant frequency at 1.73–1.81 kHz (Table 3).
...
Etymology: The speciﬁc epithet is a noun in apposition and refers to the Amazon Tapir (Tapirus terrestris), a large mammal locally known as “Danta”. During our expedition, the first time that local people and other researchers in the team spotted one of these frogs, they called it “Rana Danta”, because its head profile reminded them of the head of the Amazon Tapir. 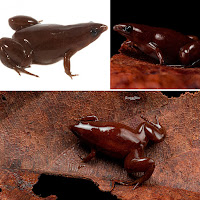 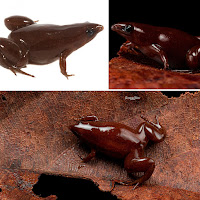